Method 1:
List the possible pairs of scratched disks in a sample space, S, keeping in mind that two different disks need to be scratched, and the order of choosing them does not matter. For example, you could use the notation AB that indicates disk A and disk B were chosen, in either order.
S = {AB, AC, AD, AE, AF, BC, BD, BE, BF, CD, CE, CF, DE, DF, EF}
There are 15 different ways of choosing two disks without replacement and without regard to order from the six possible disks.
Identify the winning amount for each choice under the outcome in S. Suppose that disks A–E hide $1.00, and disk F hides $10.00.

Exercise 4.
To play the game, you must purchase a game card. The price of the card is set so that the game is fair. What do you think is meant by a fair game in the context of playing this instant lottery game?
Answer:
Responses from students concerning what they think is meant by a fair game will no doubt vary. For example, the cost to play the game should be equal to the expected winnings.

Exercise 5.
How much should you be willing to pay for a game card if the game is to be a fair one? Explain.
Answer:
Responses will vary. In the context of this instant lottery game, the game is fair if the player is willing to pay $5.00 (the expected winning per play) to purchase each game card.

The probability distribution for the winning amount per play is as follows: 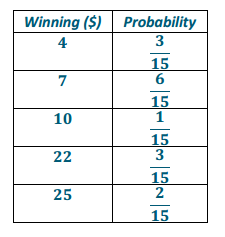 Exercise 7.
Alter the contents of the bag in Example 2 to create a game that would be a fair alternative to getting paid $10.00. You must keep six bills in the bag, but you can choose to include bill – sized pieces of paper that are marked as $0.00 to represent a $0.00 bill.
Answer:
Answers will vary. The easiest answer is to replace all six bills with $5.00 bills. But other combinations are possible, such as three $0.00 bills and three $10.00 bills. If students come up with other possibilities, make sure they support their answers with an expected value calculation.

Exercise 9.
If the cost of the additional year warranty is too high, what would be a fair price to charge?
Answer:
A fair price for the waranty would be $18.75.

Exercises 10–11
Exercise 10.
The math club is trying to decide what to charge to play the game and what the winning payoff should be per play to make it a fair game. Give an example.
Answer:
Answers will vary. If the game is to be fair, the expected amount of money taken in should equal the expected amount of payoff. Let x cents be the amount to play the game and y be the amount won by the player. The math club receives x cents whether or not the player wins. The math club loses y cents if the player wins. So, for the game to be fair, x – y(\(\frac{12}{25}\)) must be 0. Any x and y that satisfy 25x – 12y = 0 are viable. One example is for the math club to charge 12 cents to play each game with a payoff of 25 cents.

Question 1.
A game is played by drawing a single card from a regular deck of playing cards. If you get a black card, you win nothing. If you get a diamond, you win $5.00. If you get a heart, you win $10.00. How much would you be willing to pay if the game is to be fair? Explain.
Answer:
The following represents a probability distribution: 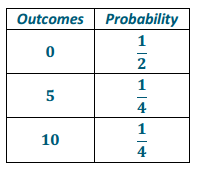 Question 2.
Suppose that for the game described in Problem 1, you win a bonus for drawing the queen of hearts. How would that change the amount you are willing to pay for the game? Explain.
Answer:
The fee to play the game should increase, as the expected winnings will increase. For example, if a bonus of $10.00 is earned for drawing the queen of hearts, the probability distribution will be 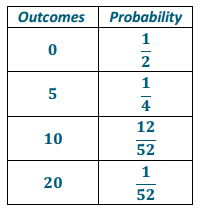 Question 3.
You are trying to decide between playing two different carnival games and want to only play games that are fair.
One game involves throwing a dart at a balloon. It costs $10.00 to play, and if you break the balloon with one throw, you win $75.00. If you do not break the balloon, you win nothing. You estimate that you have about a 15% chance of breaking the balloon.

a. What are the possible amounts you could win in this game? Write them in the cells of the table next to the corresponding outcomes.
Answer: