Exercise 1.
How many rolls would you expect it to take for you to get to 20? Explain how you would use simulation to answer this question.
Answer:
Answers will vary. It appears that many rolls result in a difference of 1, 2, or 3. Considering that I need to move 20 spaces, I would say that I expect that it would take around 8, 9, or 10 rolls to get to 20.
The random variable of interest is the distance moved on the number line for a toss of the dice. The possible values are 0, 1, 2, 3, 4, and 5. I would play the game with my partner at least 30 times and record the distance moved for each toss. Then, I would use the results to create an estimated probability distribution to determine expected value for the distance moved on 1 toss of the dice.

b. Use your expected value from part (a) to find the expected number of tosses that would put you past 20 on the number line.
Answer:
Responses will vary.
For the sample data, in 10 tosses, you would expect to be at about 21 or 22. 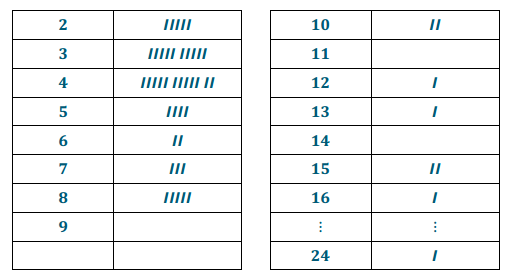 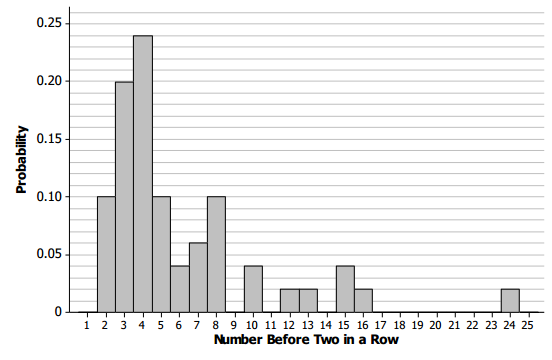 Using the sample data above, the expected value would be 6.02. If you opened many packages of cough drops, on average you would go through about 6 cough drops before you got 2 lemon-flavored ones in a row.

a. Use your results from Exploratory Challenge 1/Exercise 2 to estimate the probabilities for the distance moved on 1 toss of 2 dice in the new game.
Answer:
Responses will vary. Sample answer:

b. Which distance moved is most likely?
Answer:
Responses will vary. Sample response:
For the sample data, a distance of 2 is the most likely with a probability of 0.5.

b. Create an estimated probability distribution for how many times you would have to toss a pair of dice to get out of jail by tossing a double. (You may toss actual dice or use technology to simulate tossing dice.)
Answer:
Responses will vary.
For the sample data below, an estimated probability distribution would be as follows:
Table: Number of Times Tossing a Pair of Dice Before a Double Occurs

The table below displays the simulated tosses. The table is read down each column, from left to right. The first number represents the difference in the faces of simulated tosses of 2 dice, and the number 0 represents a double was tossed. All doubles have been highlighted. The number of times the dice were tossed between doubles appears in parentheses. 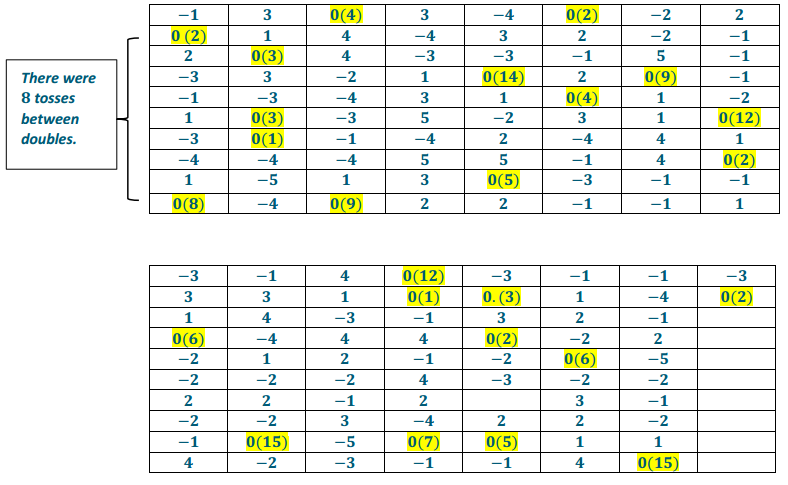 Summary of number of tosses of dice from simulation:

Question 3.
The shuttle company described in the Exit Ticket found that when they make 11 reservations, the average number of people denied a seat per shuttle is about 1 passenger per trip, which leads to unhappy customers. The manager suggests they take reservations for only 10 seats. But his boss says that might leave too many empty seats.
a. Simulate 50 trips with 10 reservations, given that in the long run, 10% of those who make reservations do not show up. (You might let the number 1 represent someone who does not show up, or a no-show, and a 0 represent someone who does show up. Generate 10 random numbers from the set that contains one 1 and nine 0s to represent the 10 reservations, and then count the number of 1s.)
Answer:
Responses will vary. Sample response:
Table: Simulated Results of the Number of No-Shows Given That 10% Are No-Shows

b. If 3 people do not show up for their reservations, how many seats are empty? Explain your reasoning.
Answer:
2 seats are empty because there are only 9 seats on the shuttle.

d. What is the expected value for the estimated probability distribution? Interpret your answer from the perspective of the shuttle company.
Answer:
Responses will vary.
For the sample data, the expected value is 0.38, which means that over the long run, 0.38 seats are empty per shuttle.

e. How many reservations do you think the shuttle company should accept and why?
Answer:
Responses will vary.
In the long run, about 1 person per trip would be denied a seat if they make 11 reservations, and they will have an empty seat over 1/3 of the time if they make only 10 reservations. What they choose to do would depend on how much they have to compensate those who are denied seats.

Question 1.
A bus company has 9 seats on a shuttle between two cities, but about 10% of the time people do not show up for the bus even though they reserve a seat. The company compensates by reserving 11 seats instead of 9. Assume that whether or not a person with a reservation shows up is independent of what happens with the other reservation holders.
a. Consider the random variable number of people who are denied a seat because more than 9 people showed up for the shuttle. What are the possible values of this random variable?
Answer:
0, 1, and 2

b. The table displays the number of people who reserved tickets and did show up based on simulating 50 trips between the two cities. Use the information to estimate a probability distribution of the number of people denied a seat on the shuttle.
Table: Number of People Who Showed Up for Their Reservations

Answer:
Table: Number of People Denied a Seat on Shuttle