Example 1.
A designer wants to test the safety of a wheelchair ramp she has designed for a building before constructing it, so she creates a scale model. To meet the city’s safety requirements, an object that starts at a standstill from the top of the ramp and rolls down should not experience an acceleration exceeding 2.4 \(\frac{\mathrm{m}}{\mathrm{s}^{2}}\) .
a. A ball of mass 0.1 kg is used to represent an object that rolls down the ramp. As it is placed at the top of the ramp, the ball experiences a downward force due to gravity, which causes it to accelerate down the ramp. Knowing that the force applied to an object is the product of its mass and acceleration, create a sketch to model the ball as it accelerates down the ramp.
Answer:

iii. 25°
Answer:
No date will correspond to this angle because it lies outside of the domain of the function. 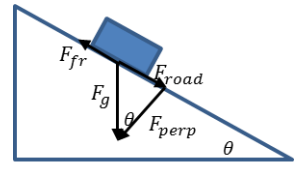 b. A tourist wants to visit the city when the average temperature is closest to 25° Celsius. What recommendations would you make regarding when the tourist should travel? Justify your response.
Answer:
x = 1+\(\frac{6}{\pi}\) cos-1 (\(\frac{25-17.5}{-8}\))) ≈ 6.32
If the tourist wants to visit when the temperature is closest to 25° Celsius, she should travel about the second week in June.

b. Plot the relationship between the number of years since the initial count and the number of rabbits. Fit a curve to the data.
Answer:

c. Repeat the procedure described in part (b) for the estimated number of coyotes over the course of the study.
Answer: 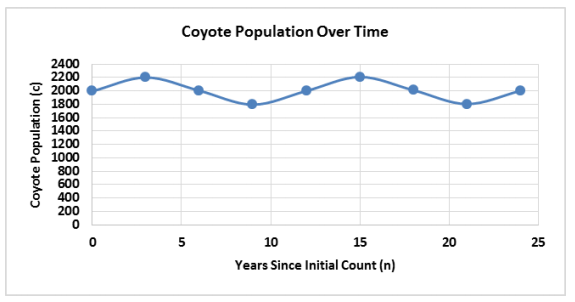 c. Use your answer to part (a) to find where the particle is when it is traveling 5 m/s for the first time.
Answer:
The particle will be located at x = 1.2 meters from the starting point on the line.

d. How can you find the other locations the particle is traveling at this speed?
Answer:
In this case, the velocity is a maximum, so it will only occur once every period. All other values can be found by adding multiples of 5 to the location. If it was not a maximum, we could subtract the location from 5/2 to find another value within the same period and then add multiples of 5 to find analogous values in other periods. 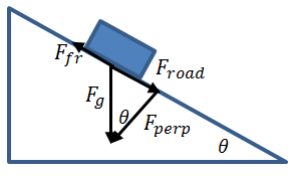 Question 5.
Talladega Superspeedway has some of the steepest turns in all of NASCAR. The main turns have a radius of about 305 m and are pitched at 33°. Let N be the perpendicular force on the car and N_v and N_h be the vertical and horizontal components of this force, respectively. See the diagram below. 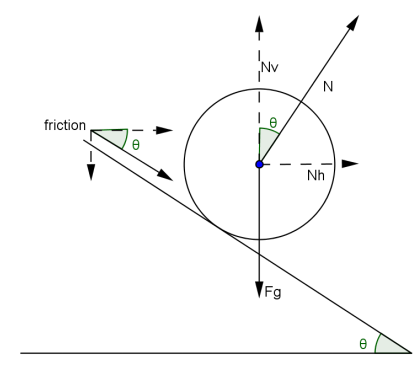 d. Assume μ = 0.75, the standard coefficient of friction for rubber on asphalt. For the Talladega Superspeedway, what is the maximum velocity on the main turns? Is this about how fast you might expect NASCAR stock cars to travel? Explain why you think NASCAR takes steps to limit the maximum speeds of the stock cars.
Answer:
v = \(\sqrt{g r \cdot \frac{\sin (\theta)+\mu \cos (\theta)}{\cos (\theta)-\mu \sin (\theta)}}\)
= \(\sqrt{9.8 \cdot 305 \cdot \frac{\sin (33)+0.75 \cos (33)}{\cos (33)-0.75 \sin (33)}}\)
≈ 90.3
90.3 m/s is about 202 mph, which is the speed most people associate with NASCAR stock cars (although they usually go slower than this). This means that at Talladega, the race cars are able to go at their maximum speeds through the main turns.
If the cars go any faster than this, then they would drift up toward the wall, which may prompt them to oversteer and possibly spin out of control. NASCAR may limit the speeds of the cars because the racetracks themselves are not designed for cars that can go faster.

e. Does the friction component allow the cars to travel faster on the curve or force them to drive slower? What is the maximum velocity if the friction coefficient is zero on the Talladega roadway?
Answer:
The friction component is in the direction toward the center of the racetrack (away from the walls), so it allows them to travel faster more safely. If μ = 0, the equation becomes v = \(\sqrt{g r \tan (\theta)}\). Therefore, the maximum velocity is about 44.1 \(\frac{\mathrm{m}}{\mathrm{s}}\) or 99 mph.

f. Do cars need to travel slower on a flat roadway making a turn than on a banked roadway? What is the maximum velocity of a car traveling on a 305 m turn with no bank?
Answer:
They need to travel much slower on a flat roadway making a turn than when traveling on a banked roadway. The normal force does not prevent the car from spinning out of control the way it does on a banked turn.
If θ = 0, then the equation becomes v = \(\). Therefore, the maximum velocity is about 47.3\(\frac{\mathrm{m}}{\mathrm{s}}\) or 106 mph, which is much slower than the velocity that cars can travel on the banked turns (202 mph).

Question 6.
At a particular harbor over the course of 24 hours, the following data on peak water levels was collected (measurements are in feet above the MLLW):

c. What appears to be the average midline for the water level?
Answer:
3.748

f. How can you find other time values for a particular water level after finding one value from your function?
Answer:
The values repeat every 13 hours, so immediately once a value is found, adding any multiple of 13 will give other values that work. Additionally, if you have the inverse cosine value for a particular water level (but have not solved for x yet), then take the opposite, solve normally, and you will have another time to which you can add multiples of 13.

b. Write the formula that gives the banking angle as a function of the radius of the turn available for a fixed airspeed v.
Answer:
θ = tan-1⁡(\(\frac{v^{2}}{r \cdot g}\))

c. For a variety of reasons, including motion sickness from fluctuating g-forces and the danger of losing lift, many airplanes have a maximum banking angle of around 60°. Does this maximum on the model affect the domain or range of the formula you gave in part (b)?
Answer:
If the angle cannot be greater than 60°, then the range caps out at 60° instead of normally being able to go up to 90°.