When an earthquake hits, the ground shifts abruptly due to forces created when the tectonic plates along fault lines rub together. As the tectonic plates shift and move, the intense shaking can even cause the physical movement of objects as large as buildings.

Suppose an earthquake causes all points in a town to shift 10 feet to the north and 5 feet to the east.

a. Explain how the diagram shown above could be said to represent the shifting caused by the earthquake.
Answer:
The arrows show the amount and direction of the shift. Each point, not just the ones represented in this diagram, would be shifted 5 feet east and 10 feet north.

b. Draw another arrow that shows the same shift. Explain how you drew your arrow.
Answer:
The new arrow would be shifted 5 feet east and 10 feet north from its initial point.

Several vectors are represented in the coordinate plane below using arrows. 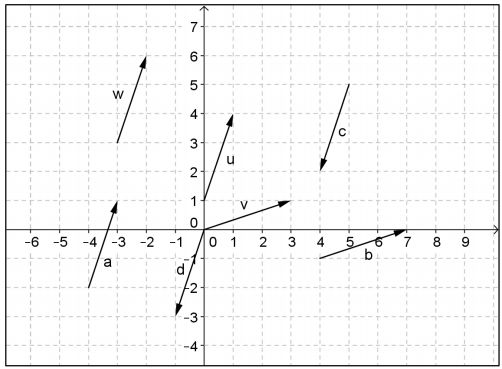 Exercise 2.
Why do arrows c and u not represent the same vector?
Answer:
These arrows have the same magnitude but opposite directions.

a. Write and draw a vector t that represents this shift caused by the second earthquake. 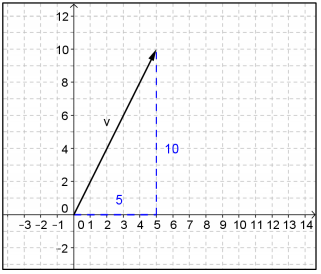 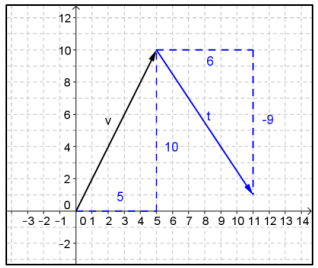 b. Draw a diagram that represents this addition and shows the resulting sum of the two vectors.
Answer: 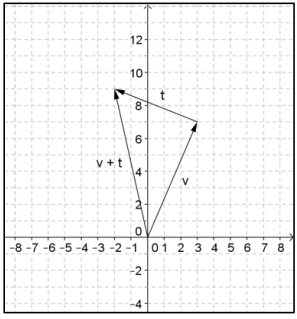 d. Draw a diagram that represents this addition and shows the resulting sum of the two vectors.
Answer: 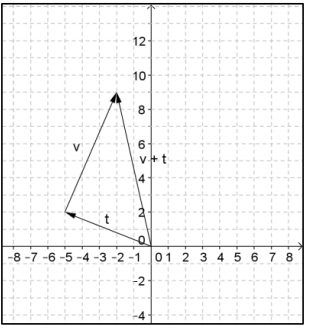 Exercise 5.
Explain why vector addition is commutative.
Answer:
Since we are combining two horizontal and two vertical translations when we add vectors, the end result will be the same regardless of the order in which we apply the translations. Thus, when we add two vectors, it doesn’t matter which comes first and which comes second. Using the rule we were given, we can see that the components represent real numbers, and thus, the commutative property should apply to each component of the resulting sum vector.

Exercise 7.
Why is the vector o = (0, 0) called the zero vector? Describe its geometric effect when added to another vector.
Answer:
The magnitude of this vector is o, and its components are 0. It maps the pre-image vector onto itself and essentially has no translational effect on the original vector, It has the same effect as add0ing the real-number 0 to any other real number.

a. Draw each vector with its initial point located at (0, 0). The vector v is already shown. How are all of these vectors related? 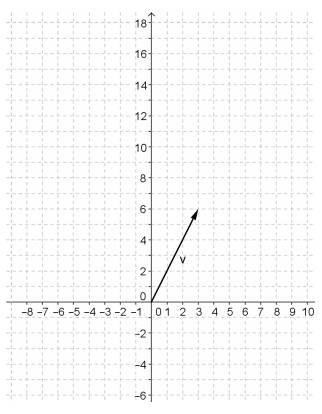 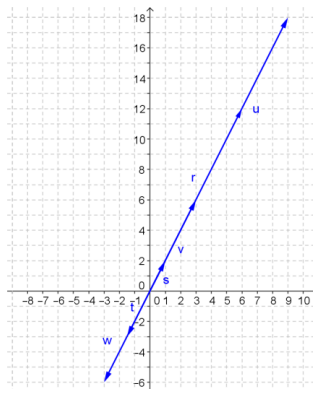 All of these vectors lie on the same line that passes through the origin. If you dilate with center (0, 0), then each vector is a dilation of every other vector in the list.

b. Which vector is 2v? Explain how you know.
Answer:
The vector 2v is twice as long as v and points in the same direction. The components would be doubled so r = 2v.

d. Is the vector p = (3√2, 6√2) a scalar multiple of v? Explain.
Answer:
Yes; p = √2v. You can see that if the initial point were located at (0, 0), then the vector p would also lie on the line through the origin that contains the other vectors in this exercise.

Exercise 10.
Describe a rule that defines vector subtraction. Use the vectors v = (5, 7) and u = (6, 3) to support your reasoning.
Answer:
Since adding two real numbers is adding the opposite of the second number to the first number, it makes sense that
vector subtraction would work in a similar way. To subtract two vectors, you add the opposite of the second vector or, more simply, just subtract the components.

We can create the opposite of u by multiplying by the scalar -1.

The magnitude of a vector y = (a, b) is the length of the line segment from the origin to the point (a, b) in the coordinate plane, which we denote by ||v||. Using the language of translation, the magnitude of y is the distance between any point and its image under the translation a units horizontally and b units vertically. It is denoted ||v||. 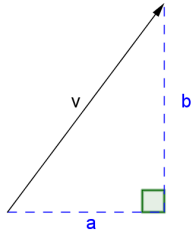 a. Is he correct? Explain your reasons.
Answer:
No, Sasha is not correct. Although a vector has a magnitude and direction, and it is numerically suited to do translation of an object, it has horizontal and vertical components indicating how many units for translation. Therefore, we can add and subtract vectors.

Question 6.
Sergei experienced one of the biggest earthquakes when visiting Taiwan in 1999. He noticed that his refrigerator moved on the wooden floor and made marks on it. By measuring the marks he was able to trace how the refrigerator moved. The first move was northeast with a distance of 20 cm. The second move was northwest with a distance of 10 cm.

The final move was northeast with a distance of 5 cm. Find the vectors that would re-create the refrigerator’s movement on the floor and find the distance that the refrigerator moved from its original spot to its resting place. Draw a diagram of these vectors.
Answer: 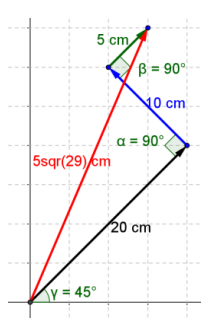 Question 1.
Vector v = (3, 4) and the vector u is represented by the arrow shown below. How are the vectors the same? How are they different?
Answer:
Both u and v have the same length and direction, so they are different representations of the same vector. They both represent a translation of 3 units right and 4 units up. 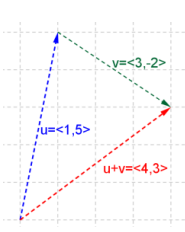 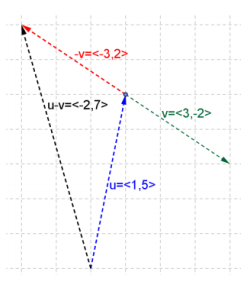 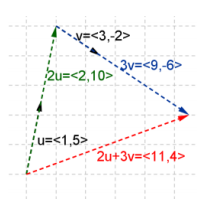