Question 1.
Find values for a, b, c, d, and e so that the following matrix product equals the 3×3 identity matrix. Explain how you obtained these values.

c. Solve the system of three linear equations given in part (b).
Answer:
The solution is given by x = A-1b , if the matrix inverse exists. But part (a) shows that if we set

,
then we have BA = I . We could check that AB = I , as well (in which case B is the matrix inverse of A), but even without knowing this, from

Question 2.
The following diagram shows two two-dimensional vectors v and w in the place positioned to each have an endpoint at point P. 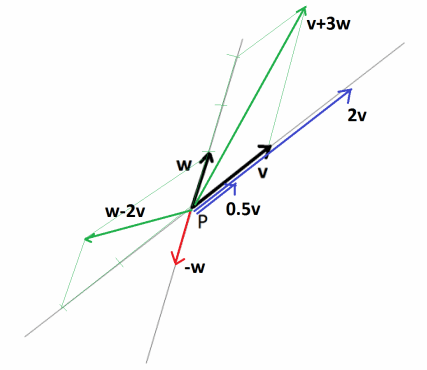 c. What is the measure of the smallest angle between -5v and 3w if these two vectors are placed to have a common endpoint? 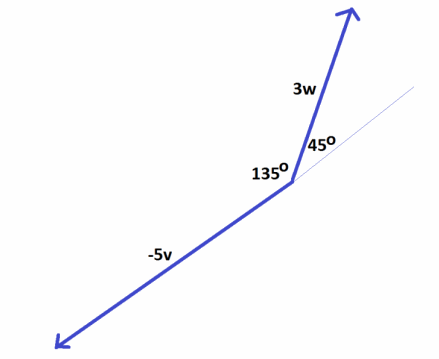 Answer:
The two vectors in question have an angle of smallest measure 135° between them.

a. What are the components of each of the vectors v+w and v-w?
Answer:

b. On the following diagram, draw representatives of each of the vectors v, w, and v+w, each with an endpoint at the origin.
Answer: 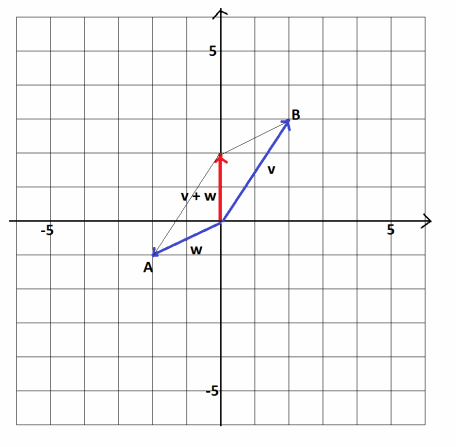 c. The representatives for the vectors v and w you drew form two sides of a parallelogram, with the vector v+w corresponding to one diagonal of the parallelogram. What vector, directed from the third quadrant to the first quadrant, is represented by the other diagonal of the parallelogram? Express your answer solely in terms of v and w, and also give the coordinates of this vector.
Answer:
Label the points A and B as shown. The vector we seek is \(\overrightarrow{A B} .\) To move from A to B we need to follow –w and then v. Thus, the vector we seek is –w + v, which is the same as v – w.
Also, we see that to move from A to B we need to move 4 units to the right and 4 units upward. This is consistent with v – w =

g. Give the components of a vector one-quarter the magnitude of vector v and with direction opposite the direction of v.
Answer:

Question 4.
Vector a points true north and has a magnitude of 7 units. Vector b points 30° east of true north. What should the magnitude of b be so that b-a points directly east?

a. State the magnitude and direction of b-a.
Answer: 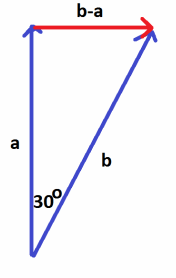 b. Write b-a in magnitude and direction form.
Answer:

c. What is the value of the ratio

Question 6.
A section of a river, with parallel banks 95 ft. apart, runs true north with a current of 2 ft/sec. Lashana, an expert swimmer, wishes to swim from point A on the west bank to the point B directly opposite it. In still water she swims at an average speed of 3 ft/sec. 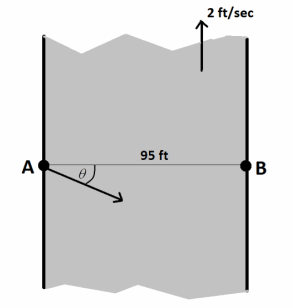 The diagram to the right illustrates the situation.

To counteract the current, Lashana realizes that she is to swim at some angle θ to the east/west direction as shown.

With the simplifying assumptions that Lashana’s swimming speed will be a constant 3 ft/sec and that the current of the water is a uniform 2 ft/sec flow northward throughout all regions of the river (e.g., we ignore the effects of drag at the river banks), at what angle θ to east/west direction should Lashana swim in order to reach the opposite bank precisely at point B? How long will her swim take?

a. What is the shape of Lashana’s swimming path according to an observer standing on the bank watching her swim? Explain your answer in terms of vectors.
Answer:
Lashana’s velocity vector v has magnitude 3 and resolves into two components as shown, a component in the east direction vE and a component in the south direction vS. 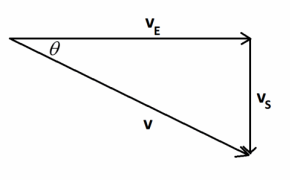 b. If the current near the banks of the river is significantly less than 2 ft/sec, and Lashana swims at a constant speed of 3 ft/sec at the constant angle θ to the east/west direction as calculated in part (a), will Lashana reach a point different from B on the opposite bank? If so, will she land just north or just south of B? Explain your answer.
Answer:
As noted in the previous solution, Lashana will have no sideways motion in her swim. She will swim a straight-line path from A to B .
If the current is slower than 2 ft/sec at any region of the river surface, Lashana’s velocity vector component vS, which has magnitude 2 ft/sec , will be larger in magnitude than the magnitude of the current. Thus, she will swim slightly southward during these periods. Consequently, she will land at a point on the opposite bank south of B .

Question 7.
A 5 kg ball experiences a force due to gravity \(\vec{F}\) of magnitude 49 newtons directed vertically downward. If this ball is placed on a ramp tilted at an angle of 45°, what is the magnitude of the component of this force, in newtons, on the ball directed 45° toward the bottom of the ramp? (Assume the ball has a small enough radius that all forces are acting at the point of contact of the ball with the ramp.) 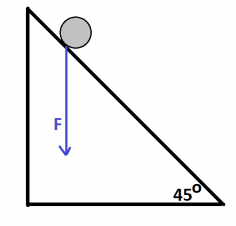 Answer:
The force vector can be resolved into two components as shown: Framp and Fperp. 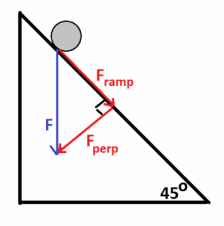 a. Find the coordinates of the point P(t) each in terms of t.
Answer:
We will write the coordinates of points as 3 × 1 column matrices, as is consistent for work with matrix notation.
The velocity vector of the particle is \(\overrightarrow{A B}\) =

So, its position at time t is

c. Find the coordinates of A’ and B’.
Answer:

A second particle moves through three-dimensional space. Its position at time t is given by L(P(t)), the image of the location of the first particle under the transformation L.