Exercise 1.
Old Faithful is a geyser in Yellowstone National Park. The following table offers some rough estimates of the length of an eruption (in minutes) and the amount of water (in gallons) in that eruption.

b. Which of the following two scatter plots should Chang use to build his prediction model? Explain.

Answer:
The predicted variable goes on the vertical axis with the predictor on the horizontal axis. So, the amount of water goes on the y – axis. The plot on the graph on the right should be used.

Exercise 2.
The following table gives the times of the gold, silver, and bronze medal winners for the men’s 100 – meter race (in seconds) for the past 10 Olympic Games.

b. Draw a scatter plot to determine if the relationship between mean time and year appears to be linear. Comment on any trend or pattern that you see in the scatter plot.
Answer:
The scatter plot indicates a negative trend, meaning that, in general, the mean race times have been decreasing over the years even though there is not a perfect linear pattern. 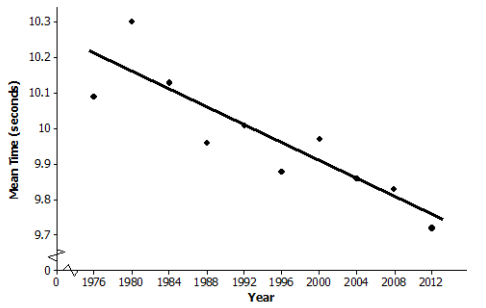 Note to Teacher: In Algebra I, students learn a formal method called least squares for determining a “best – fitting” line. For comparison, the least squares prediction line is y = 34.3562 + ( – 0.0122)x.

d. Before he saw these data, Chang guessed that the mean time of the three Olympic medal winners decreased by about 0.05 second from one Olympic Game to the next. Does the prediction model you found in part (c) support his guess? Explain.
Answer:
The slope – 0.0125 means that from one calendar year to the next, the predicted mean race time for the top three medals decreases by 0.0125 second. So, between successive Olympic Games, which occur every four years, the predicted mean race time is reduced by 0.05 second because 4(0.0125) = 0.05.

f. The data point (1980,10.3) appears to have an unusually high value for the mean race time (10.3). Using your library or the Internet, see if you can find a possible explanation for why that might have happened.
Answer:
The mean race time in 1980 was an unusually high 10.3 seconds. In their research of the 1980 Olympic Games, students find that the United States and several other countries boycotted the games, which were held in Moscow. Perhaps the field of runners was not the typical Olympic quality as a result. Atypical points in a set of data are called outliers. They may influence the analysis of the data. 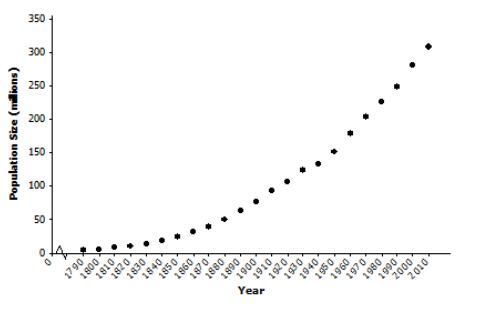 c. Consider the data only from 1950 to 2010. Does the relationship between year and population size for these years appear to be linear?
Answer:
Drawing a scatter plot using the 1950–2010 data indicates that the relationship between population size and year of birth is approximately linear, although some students may say that there is a very slight curvature to the data. 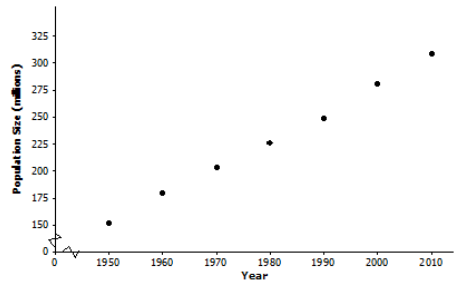 d. One line that could be used to model the relationship between year and population size for the data from 1950 to 2010 is y = – 4875.021 + 2.578x. Suppose that a sociologist believes that there will be negative consequences if population size in the United States increases by more than 2 \(\frac{3}{4}\) million people annually. Should she be concerned? Explain your reasoning.
Answer:
This problem is asking students to interpret the slope. Some students will no doubt say that the sociologist need not be concerned, since the slope of 2.578 million births per year is smaller than her threshold value of 2.75 million births per year. Other students may say that the sociologist should be concerned, since the difference between 2.578 and 2.75 is only 172,000 births per year.

Question 2.
In search of a topic for his science class project, Bill saw an interesting YouTube video in which dropping mint candies into bottles of a soda pop caused the soda pop to spurt immediately from the bottle. He wondered if the height of the spurt was linearly related to the number of mint candies that were used. He collected data using 1, 3, 5, and 10 mint candies. Then, he used two – liter bottles of a diet soda and measured the height of the spurt in centimeters. He tried each quantity of mint candies three times. His data are in the following table.

b. Draw a scatter plot that could be used to determine whether the relationship between height of spurt and number of mint candies appears to be linear.
Answer: 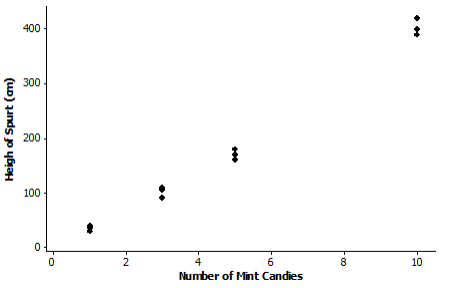 Question 1.
According to the Bureau of Vital Statistics for the New York City Department of Health and Mental Hygiene, the life expectancy at birth (in years) for New York City babies is as follows. 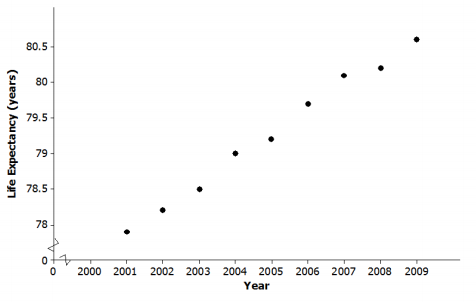 d. Based on the context of the problem, interpret in words the intercept and slope of the line you found in part (c).
Answer:
Answers will vary based on part (c). The intercept says that babies born in New York City in Year 0 should expect to live around – 597 years! Be sure students actually say that this is an unrealistic result and that interpreting the intercept is meaningless in this problem. Regarding the slope, for an increase of 1 in the year of birth, predicted life expectancy increases by 0.3375 year, which is a little over four months.