Exercise 1.
For each of the following dependent (response) variables, identify two possible numerical independent (explanatory) variables that might be used to predict the value of the dependent variable. 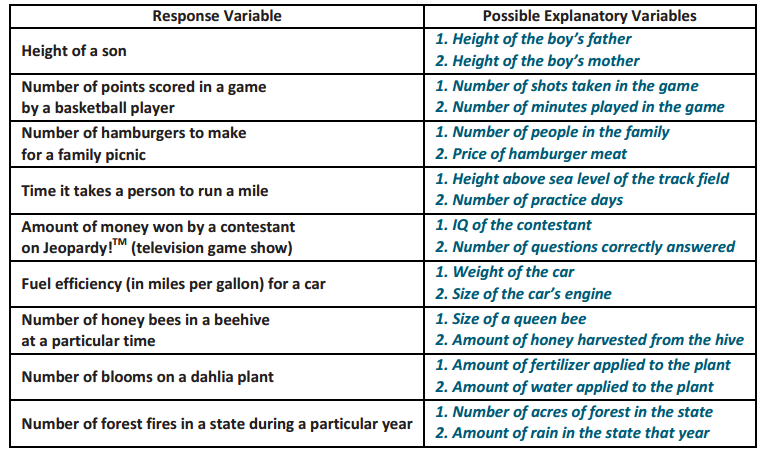 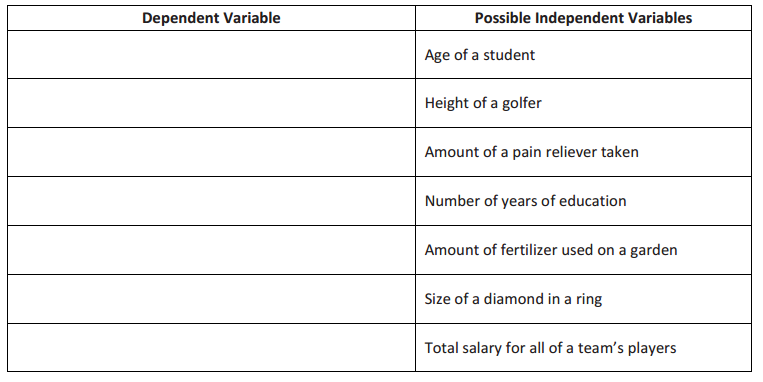 Exercise 7.
Explain what $0.15 represents in this relationship.
Answer:
$0.15 represents the slope of the linear relationship, or the change in the total monthly cost is $0.15 for an increase of one text message. (Students need to clearly explain that slope is the change in the dependent variable for a
1 – unit increase in the independent variable.)

Exercise 9.
Sketch a graph of this relationship on the following coordinate grid. Clearly label the axes, and include units in the labels. 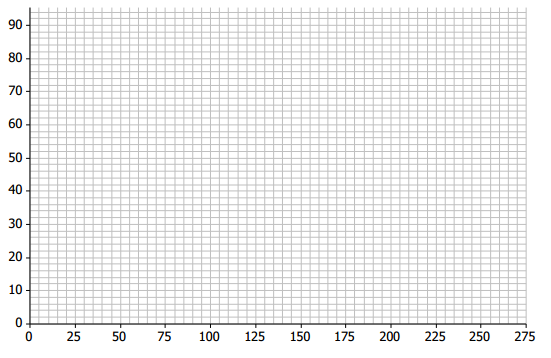 Answer:
Anticipated response: Students label the x – axis as the number of text messages. They label the y – axis as the total monthly cost. Students use any two points they derived in Exercise 3. The following graph uses the point of (0,40) for Justin and the point (250,77.5) for Robert. Highlight the intercept of (0,40), along with the slope of the line they sketched. Also, point out that the line students draw should be a dotted line (and not a solid line). The number of text messages can only be whole numbers, and as a result, the line representing this relationship should indicate that values in between the whole numbers representing the text messages are not part of the data. 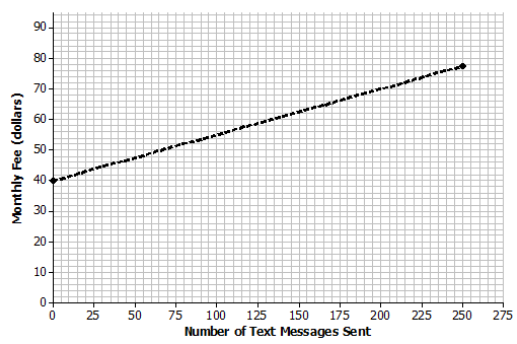 Exercise 10.
LaMoyne needs four more pieces of lumber for his Scout project. The pieces can be cut from one large piece of lumber according to the following pattern.

c. In the context of this problem, interpret the slope of the equation in words.
Answer:
Using any of the three forms, each additional cut beyond the free one adds $0.25 to the total cost for cutting.

Exercise 11.
Omar and Olivia were curious about the size of coins. They measured the diameter and circumference of several coins and found the following data. 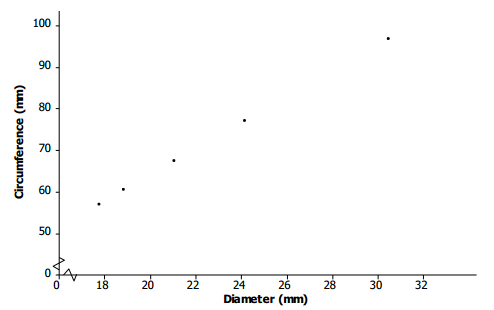 d. The value of the slope is approximately equal to the value of π. Explain why this makes sense.
Answer:
The slope is identified as being approximately equal to π. (Note: Most students have previously studied the relationship between circumference and diameter of a circle. However, if students have not yet seen this result, discuss the interesting result that if the circumference of a circle is divided by its diameter, the result is a constant, namely, 3.14 rounded to two decimal places, no matter what circle is being considered.)

e. What is the value of the y – intercept? Explain why this makes sense.
Answer:
If the diameter of a circle is 0 (a point), then according to the equation, its circumference is 0. That is true, so interpreting the intercept of 0 makes sense in this problem.

Question 1.
The Mathematics Club at your school is having a meeting. The advisor decides to bring bagels and his award – winning strawberry cream cheese. To determine his cost, from past experience he figures 1.5 bagels per student.
A bagel costs 65 cents, and the special cream cheese costs $3.85 and will be able to serve all of the anticipated students attending the meeting.
a. Find an equation that relates his total cost to the number of students he thinks will attend the meeting.
Answer:
Encourage students to write a problem in words in its context. For example, the advisor’s total cost = cream cheese fixed cost + cost of bagels. The cost of bagels depends on the unit cost of a bagel times the number of bagels per student times the number of students. So, with symbols, if c denotes the total cost in dollars and n denotes the number of students, then c = 3.85 + (0.65)(1.5)(n), or c = 3.85 + 0.975n.

b. In the context of the problem, interpret the slope of the equation in words.
Answer:
For each additional student, the cost goes up by 0.975 dollar, or 97.5 cents.

c. In the context of the problem, interpret the y – intercept of the equation in words. Does interpreting the intercept make sense? Explain.
Answer:
If there are no students, the total cost is $3.85. Students could interpret this by saying that the meeting was called off before any bagels were bought, but the advisor had already made his award – winning cream cheese, so the cost is $3.85. The intercept makes sense. Other students might argue otherwise. 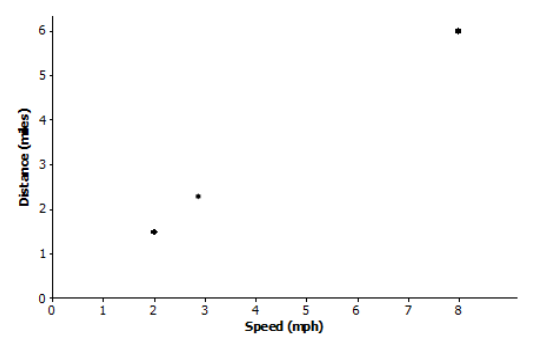 c. In the context of the problem, interpret the slope of the equation in words.
Answer:
If someone increases her speed by 1 mile per hour, then that person travels 0.75 additional mile in 45 minutes.

d. In the context of the problem, interpret the y – intercept of the equation in words. Does interpreting the intercept make sense? Explain.
Answer:
The intercept of 0 makes sense because if the speed is 0 miles per hour, then the person is not moving.
So, the person travels no distance.

b. Write an equation for the total cost to repay a loan of $P if the rate of interest for a year is r (expressed as a decimal) for a time span of t years.
Answer:
Note: Work with students in identifying variables to represent the values discussed in this exercise. For example, the total cost to repay a loan is the amount of the loan plus the simple interest, or P + I, where P represents the amount of the loan and I represents the simple interest over t years.
The amount of interest per year is P times the annual interest. Let r represent the interest rate per year as a decimal.

Question 2.
Write an equation in symbols that relates the total monthly cost in dollars (y) to monthly minutes used (x).
Answer:
The equation is y = 20 + 0 .05x, where y is the total cost for a month in dollars and x is cell phone usage for the month in minutes.