Exercise 1.
a. In the space below, create a word problem that involves integer multiplication. Write an equation to model the situation.
Answer:
Answers will vary.
Both times we went to the fair, I borrowed $3 from my older brother. -$3 × 2 = -$6

b. Now change the word problem by replacing the integers with non-integer rational numbers (fractions or decimals), and write the new equation.
Answer:
Answers will vary.
Both times we went to the fair, I borrowed $3.50 from my older brother. -$3.50×2=-$7.00

→ Was the process for solving the second problem different from the process you used to solve the problem when it contained only integers?
→ No
Students record the rules in Exercise 1, part (d) of their student materials.

Students record the rules in Exercise 2, part (b) of their student materials.

Exercise 3.
Use the fundraiser chart to help answer the questions that follow.

Jeremy is selling plants for the school’s fundraiser, and listed above is a chart from his fundraiser order form. Use the information in the chart to answer the following questions. Show your work, and represent the answer as a rational number; then, explain your answer in the context of the situation.
a. If Tamara Jones writes a check to pay for the plants, what is the resulting change in her checking account balance?
Answer:
-4.25 × 2 = -8.50
Numerical Answer:
Answer:
-8.50
Explanation:
Answer:
Tamara Jones will need to deduct $8.50 from her checking account balance.

e. Jeremy approaches three people who do not want to buy any plants; however, they wish to donate some money for the fundraiser when Jeremy delivers the plants one week later. If the people promise to donate a total of $14.40, what will be the average cash donation?
Answer:
14.40 ÷ 3 = 4.80
Numerical Answer: 4.80
Explanation: The average cash donation will be $4.80 per person.

Question 2.
Monica regularly records her favorite television show. Each episode of the show requires 3.5% of the total capacity of her video recorder. Her recorder currently has 62% of its total memory free. If Monica records all five episodes this week, how much space will be left on her video recorder?
Answer:
62 + 5(-3.5) = 62 + (-17.5) = 44.5
Monica’s recorder will have 44.5% of its total memory free.

For Problems 3–5, find at least two possible sets of values that will work for each problem.

For Problems 6–8, create word problems that can be represented by each expression, and then represent each product or quotient as a single rational number.

Question 6.
8×(-0.25)
Answer:
Answers may vary.
Example: Stacey borrowed a quarter from her mother every time she went to the grocery store so that she could buy a gumball from the gumball machine. Over the summer, Stacey went to the grocery store with her mom eight times. What rational number represents the dollar amount change in her mother’s money due to the purchase of gumballs?
Answer: -2

Harrison made up a game for his math project. It is similar to the Integer Game; however, in addition to integers, there are cards that contain other rational numbers such as -0.5 and -0.25. Write a multiplication or division equation to represent each problem below. Show all related work.

Question 1.
Harrison discards three -0.25 cards from his hand. How does this affect the overall point value of his hand? Write an equation to model this situation.
Answer:
-3 (-0.25) = 0.75
The point value of Harrison’s hand will increase by 0.75 points.

Directions: Determine the product of the integers, and write it in the column to the right. 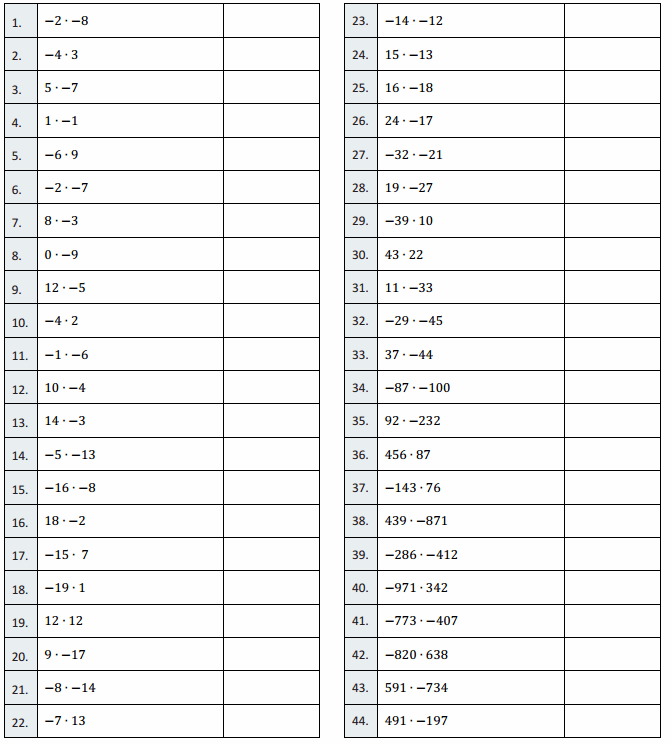 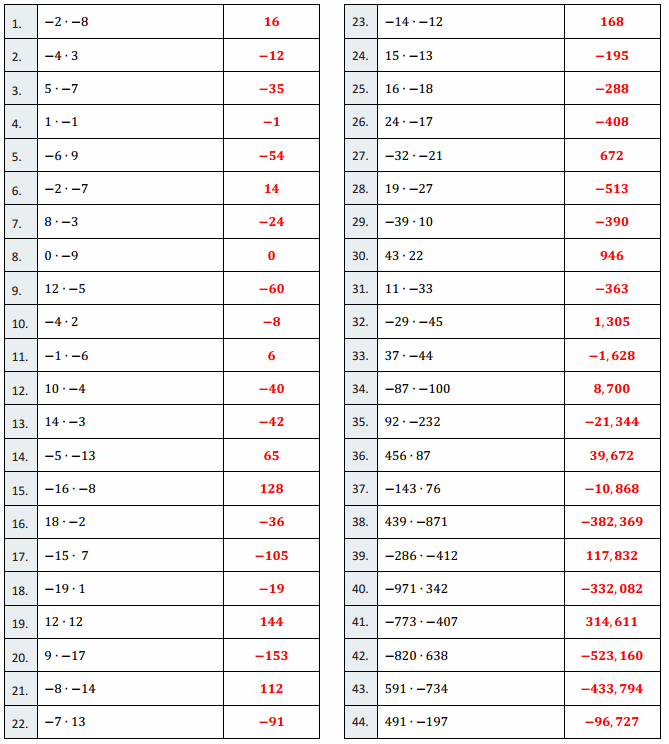