Here is a data set of the ages (in years) of 43 participants who ran in a 5-kilometer race.

Here are some summary statistics, a dot plot, and a histogram for the data: 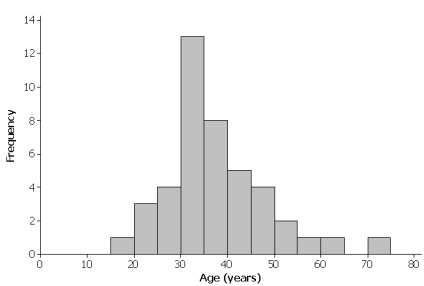 Exercise 1.
Based on the histogram, would you describe the shape of the data distribution as approximately symmetric or as skewed? Would you have reached this same conclusion looking at the dot plot?
Answer:
Both graphs show a slightly skewed right data distribution.

Exercise 3.
What is something you can see in the dot plot that is not as easy to seem the histogram?
Answer:
When using the histogram, we cannot determine the exact minimum or maximum age – for example, we only know that the minimum age is between 15 and 20 years of age. Also, we can only approximate the median (we cannot figure out the exact median value from a histogram).

Exercise 4.
Do the dot plot and the histogram seem to be centered in about the same place?
Answer:
Yes. As both graphs are based on the same data, they should generally communicate the same information regarding center.

Exercise 5.
Do both the dot plot and the histogram convey information about the variability in the age distribution?
Answer:
Yes, as both graphs are based on the same data, they should generally communicate the same information regarding variability. However, as mentioned earlier, the oldest runner (74) appears to be o more extreme departure from the rest of the data ¡rl the dot plot. This does not show up as much in the histogram.

Exercise 6.
If you did not have the original data set and only had the dot plot and the histogram, would you be able to find the value of the median age from the dot plot?
Answer:
Yes. See the response to Exercise 3.

Exercise 7.
Explain why you would only be able to estimate the value of the median if you only had a histogram of the data.
Answer:
The median is the 22nd ordered observation in this data set since there are 43 observations. Counting from left to right, we know that the first 21 observations are in the first 4 intervals: 15 – 20(1 value), 20 – 25(3 values), 25 – 30 (4 values), and 30 – 3 5 (13 values). Cumulatively, we have encountered the lowest observations by the time we are finished with the 30 – 35 interval. So, the 22nd value must be in the next interval, which is 35 – 40 years of age. We just cannot determine the exact value from the histogram.

Exercise 8.
Suppose that a newspaper article was written about race. The article included the histogram shown here and also said, “The race attracted many older runners this year. The median age was 45.” Based on the histogram, how can you tell that this is an incorrect statement? 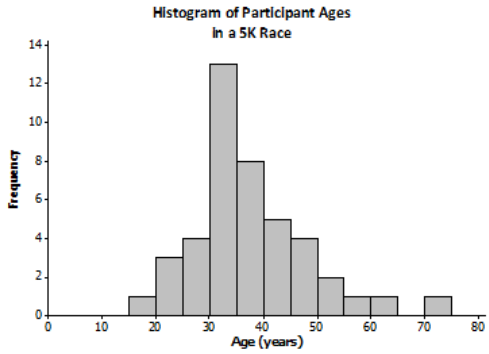 Exercise 9.
One of the histograms below is another correctly drawn histogram for the runners’ ages. Select the correct histogram, and explain how you determined which graph is correct (and which one is incorrect) based on the summary measures and dot plot. 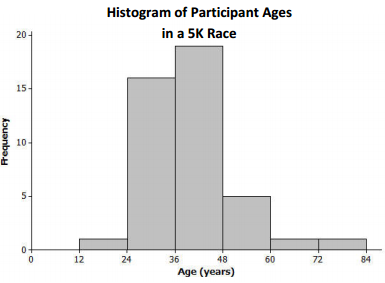 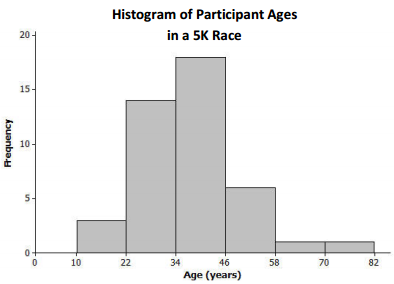 Answer:
One of the objectives of this question is to reinforce the idea that there is more than one way to draw a proper histogram for a distribution. This question is especially detail-oriented because students need to carefully reconcile components of the histogram with the data set given in Example 1.

The histogram on the right is the correct one because it is consistent with the dot pot/data. Most notably, the histogram on the right correctly shows there are 3 runners in the 10 – 22 age group, while the left histogram shows only 1 runner in the 12 – 2 4 age group (and there are actually 4 runners in that interval). Other intervals in the left histogram do not match the dot plot/data (e.g., the 48-60 group), so several answers are possible.

Exercise 10.
The histogram below represents the age distribution of the population of Kenya in 2010. 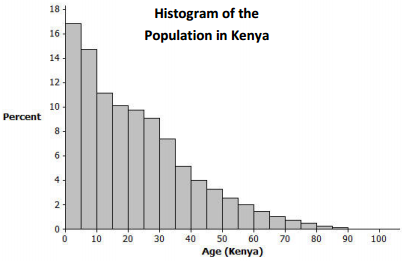 a. How do we know from the graph above that the first quartile (Q1) of this age distribution is between 5 and 10 years of age?
Answer:
Since a histogram should display information that is consistent with summary measures, we are seeking a data value such that 25% of the distribution is at or below that value. While the 0 – 5 age group represents approximately the lowest 17%. the next group (age 5 – 10) appears to account for approximately the next 15% of the distribution. This means that about 17% is below 5 and about 32% is below 10. So, the 25% mark would be somewhere between 5 and 10 years.

b. Someone believes that the median age in Kenya is about 30. Based on the histogram, is 30 years a good estimate of the median age for Kenya? Explain why it is or why it is not.
Answer:
The median does not appear to be 30 years of age. Specifically, the 50th percentile estimated by adding approximate percentages (and/or visually assessing the point at which the area seems split evenly) appears to be in the 15 – 20 age group. 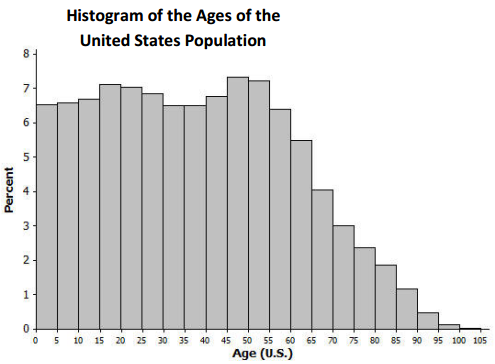 Answer:
Using similar arguments as described in the response to Exercise 10 part (b), the median appears to be in the 30 – 40 age group, most likely in the 35 – 40 interval.

Exercise 12.
Consider the following three-dot plots. Note: The same scale is used in each dot plot. 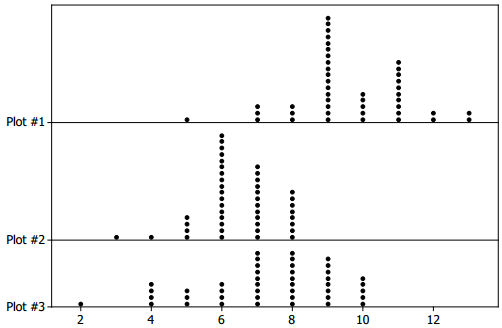 a. Which dot plot has a median of 8? Explain why you selected this dot plot over the other two.
Answer:
Plot 3 – It is the only distribution visually centered near 8, and one can tell that the 22 ordered observation (the median in this case) is 8.

Question 1.
The following histogram shows the amount of coal produced (by state) for the 20 largest coal-producing states in 2011. Many of these states produced less than 50 million tons of coal, but one state produced over 400 million tons (Wyoming). For the histogram, which one of the three sets of summary measures could match the graph? For each choice that you eliminate, give at least one reason for eliminating the choice. 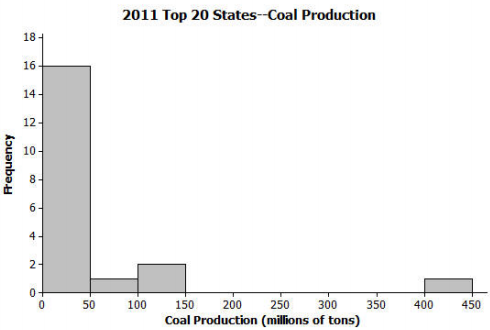 Question 2.
The heights (rounded to the nearest inch) of the 41 members of the 2012 – 2013 University of Texas Men’s Swimming and Diving Team are shown in the dot plot below. 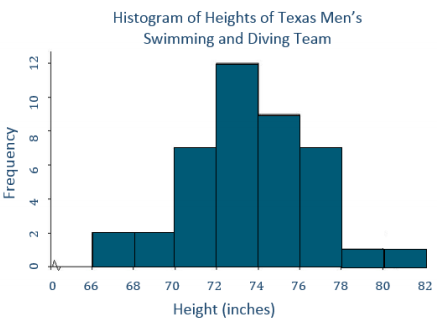 Question 3.
Data on the weight (in pounds) of 143 wild bears are summarized in the histogram below. 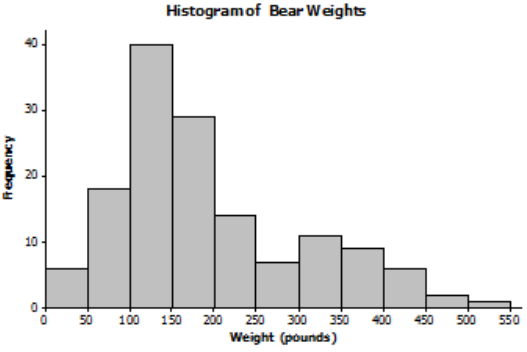 Which one of the three-dot plots below could be a dot plot of the bear weight data? Explain how you determined which the corrected plot. 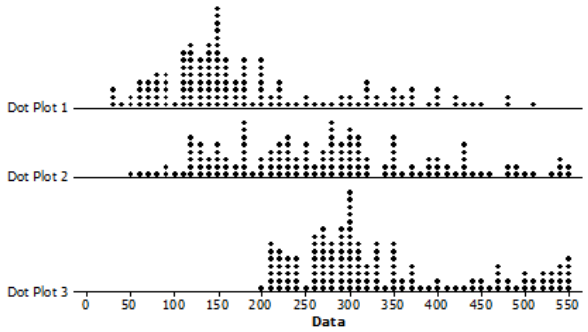 Choice (b) would not work because a median value of 1.71 would be too high. By estimating the dot values, we see that the 5th and 6th ordered observations (the median for a data set of 10 items) are near 1.4. Also, the MAD is much too large because the range of the data set is only 1.29 pints.

Question 2.
Which one of the three histograms below could be a histogram for the data displayed in the dot plot in Problem 1? For each histogram that you eliminate, give at least one reason for eliminating it as a possibility. 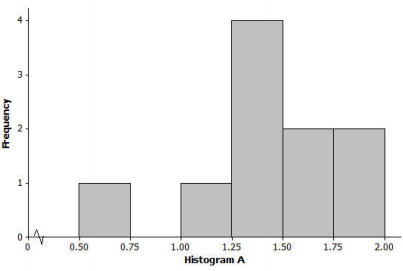 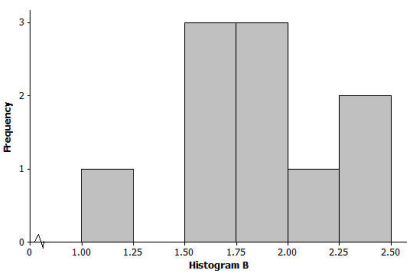 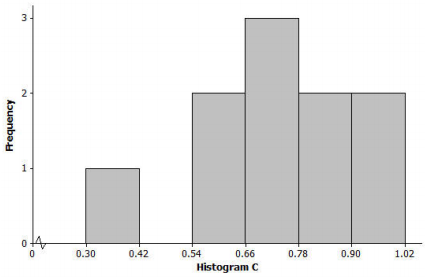 Answer:
The correct answer is the histogram (a).

Histograms (b) and (c) ore for data sets with similar shape features to the correct graph (histogram (a)), but the range and distribution of values do not match the data set in the dot plot. For example, histogram (b) would not be valid, as it is based on 3 data values of 2 pints or more, and there are no values that large in the original dot plot.