Exercise 1.
The Supreme Court is the highest court of law in the United States, and it makes decisions that affect the whole country. The chief justice is appointed to the court and is a justice the rest of his lite unless he resigns or becomes ill. Some people think that this means that the chief justice serves for a very long time. The first chief justice was appointed in 1789.

The table shows the years in office for each of the chief justices of the Supreme Court as of 2013: 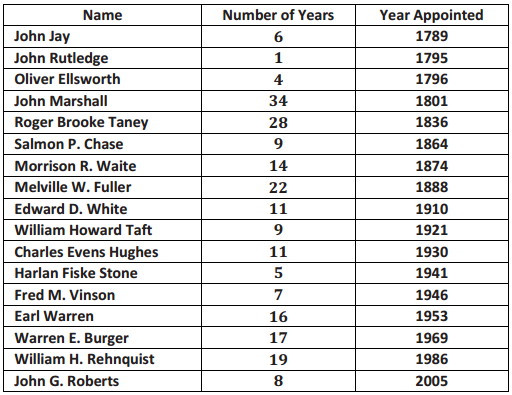 Use the table to answer the following:

b. What is the median number of years these chief justices have served on the Supreme Court? Explain how you found the median and what it means In terms of the data.
Answer:
First, you have to put the data in order. There are 17 justices, so the median would fall at the 9th value (11 years) counting from the top or from the bottom. The median is 11. Approximately half of the justices served less than or equal to 11 years, and half served greater than or equal to 11 years.

c. Make a box plot of the years the justices served. Describe the shape of the distribution and how the median
and IQR relate to the box plot.
Answer:
The distribution seems to have more justices serving a small number of years (on the lower end). The range (max – mm) is 33 years, from 1 year to 34 years. The IQR is 18 – 6. 5 = 11.5, so about half of the chief justices had terms in the 11.5-year interval from 6.5 to 18 years.

Exercise 2.
A broadband company timed how long it took to download 232 four-minute songs on a dial-up connection. The dot plot below shows their results.

a. What can you observe about the download times from the dot plot?
Answer:
The smallest time was a little bit less than 5 minutes, and the largest is a little bit more than 17 minutes. Most of the times seem to be between 8 to 13 minutes.

b. Is it easy to tell whether or not 12.5 minutes is in the top quarter of the download times?
Answer:
You cannot easily tell from the dot plot.

c. The box plot of the data is shown below. Now, answer parts (a) and (b) above using the box plot.
Answer:

d. What are the advantages of using a box plot to summarize a large data set? What are the disadvantages?
Answer:
With lots of data, the dots in a dot plot overlap, and while you can see general patterns, it is hard to really get anything quantifiable. The box plot shows at least an approximate value for each of the five-number summary measures and gives a pretty good idea of how the data are spread out.

The disadvantage of box plots is that the specific values in the data set are not given.
Teacher note: It may be useful to have a brief class discussion of the advantages/disadvantages of dot plots and box plots. You can use the dot plot in part (a) and the box plot in part (b) to facilitate this discussion.

Exercise 3.
Molly presented the box plots below to argue that using a dial-up connection would be better than using a broadband connection. She argued that the dial-up connection seems to have less variability around the median even though the overall range seems to be about the same for the download times using broadband. What would you say? 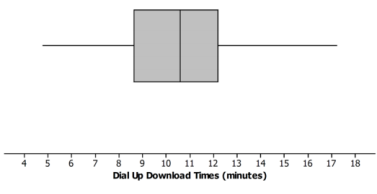 Answer:
The scales are different for the two plots, and so are the units, so you cannot just look at the box plots. The time using broadband is centered near seconds to download the song while the median for dial-up is almost minutes for a song. This suggests that broadband is going to be faster than dial-up.

Teacher note:
This is an important point. Make sure that students understand the importance of using the same scale if box plots are being constructed to compare two data distributions.

Exercise 4.
Data on the average rainfall for each of the twelve months of the year were used to construct the two-dot plots below.

c. Based on the dot plots, what are the approximate values of the interquartile ranges (IQRs) for the average monthly precipitations for each city? Use the lQRs to compare the cities.
Answer:
The answers that follow are based on estimates from the dot plot. Students might get slightly different values. For St. Louis, the IQR is 4.2 – 3.2 = 1; for San Francisco, the IQR is 3.9 – 0.2 = 3.7. About the middle half of the monthly precipitation amounts in St. Louis are within 1 inch of each other. In San Francisco, the middle half of the monthly precipitation amounts are within about 4 inches of each other.

d. In an earlier lesson, the average monthly temperatures were rounded to the nearest degree Fahrenheit. Would it make sense to round the amount of precipitation to the nearest inch? Why or why not?
Answer:
Answers will vary. Possible answers include: It would not make sense because the numbers are pretty close together, or yes, it would make sense because you would still get a good idea of how the precipitation varied.

Exercise 5.
Use the data from Exercise 4 to answer the following.

a. Make a box plot of the monthly precipitation amounts for each city using the same scale. 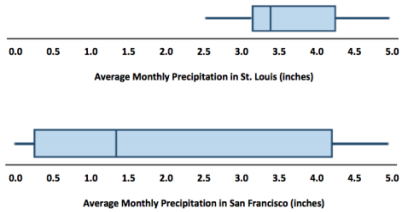 e. Think about the dot plots and the box plots. Which representation do you think helps you the most in understanding how the data vary?
Answer:
Answers will vary. Some sample answers are provided below.
The dot plot because we can see individual values.
The box plot because it just shows how the data are spread out in each of the four sections.

Question 1.
The box plots below summarize the ages at the time of the award for leading actress and leading actor Academy Award winners. 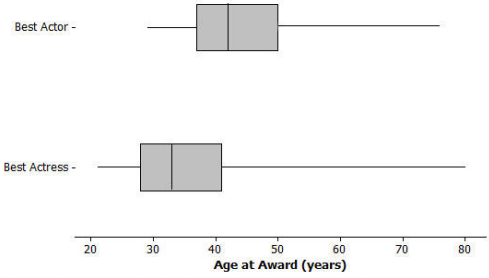 b. The oldest female to win an Academy Award was Jessica Tandy in 1990 for Driving Miss Daisy. The oldest actor was Henry Fonda for On Golden Pond in 1982. How old were they when they won the award? How can you tell? Were they a lot older than most of the other winners?
Answer:
Henry Fonda was 76, and Jessica Tandy was 80. I know this because those are the maximum values. You cannot tell if there were actors or actresses that were nearly as old.

Question 2.
The scores of sixth and seventh graders on a test about polygons and their characteristics are summarized in the box plots below. 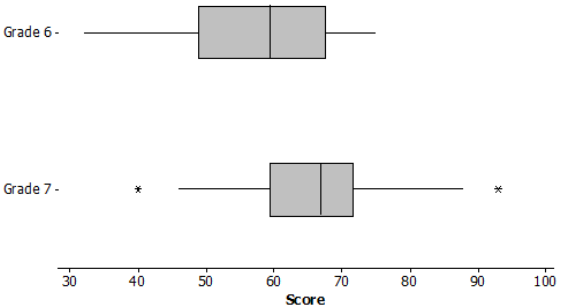 b. Why do you think two of the data values in Grade 7 are not part of the line segments?
Answer:
The highest and lowest scores were pretty far away from the other scores, so they were marked separately.

c. How do the median scores for the two grades compare? Is this surprising? Why or why not?
Answer:
The median score in Grade 7 was higher than the median in Grade 6. This makes sense because the seventh graders should know more than the sixth graders.

a. Do you agree or disagree with the statement? Explain your thinking.
Answer:
The mean number of years as chief justice overall is about 13. The mean number of years since 1969 is about 14.7. Even though the mean has increased, it does not seem like a big difference because there have only been three justices since then to cover o span of 44 years (and three times 13 is 39, so not enough to really show an increasing trend).

b. Would your answer change if you used the median number of years rather than the mean?
Answer:
The median overall was 11 years; the median since 1969 was 17 years, which is considerably larger. This seems to justify the statement.

Data on the number of pets per family for students in a sixth-grade class are summarized in the box plot below:

Question 1.
Can you tell how many families have two pets? Explain why or why not.
Answer:
You cannot tell from the box plot. You only know that the lower quartile (Q]) is 2 pets. You do not know how many families are included in the data set.

Question 2.
Given the box plot above, which of the following statements are true? If the statement is false, modify it to make the statement true.

a. Every family has at least one pet.
Answer:
True

b. About one-fourth of the families have six or more pets.
Answer:
True

e. About three-fourths of the families have two or more pets.
Answer:
True