b. Describe what the picture indicates about the river’s current water level. 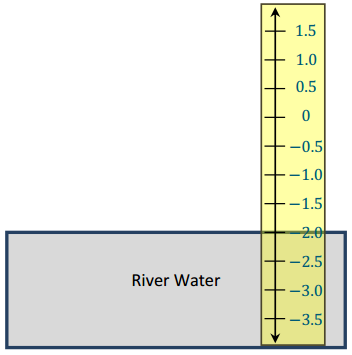 Answer:
The river’s water level is about 2 feet below normal.

d. If heavy rain is in the forecast for the area for the next 24 hours, what reading might you expect to see on this gauge tomorrow? Explain your reasoning.
Answer:
I would expect to see the water level closer to 0 or even higher. Heavy rain should cause the amount of water in the river to increase, So its level would move up the number line.

b. On the number line below, locate and label the points that represent the rational numbers listed in part (a). Describe the relationship between these two numbers. Zero on the number line represents Isaac’s balance before the mistake was made.

The numbers that represent the two transactions are opposites.

Question 3.
A local park’s programs committee is raising money by holding mountain bike races on a course through the park. During each race, a computer tracks the competitors’ locations on the course using GPS tracking. The table shows how far each competitor is from a checkpoint. 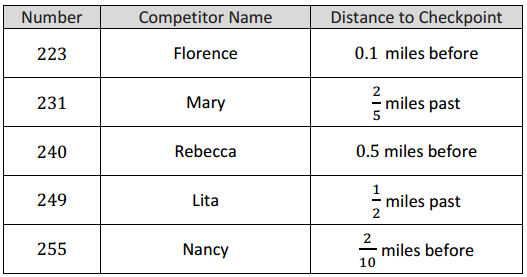 Question 4.
Andrea and Marta are testing three different coolers to see which keeps the coldest temperature. They placed a bag of ice in each cooler, closed the coolers, and then measured the air temperature inside each after 90 minutes. The temperatures are recorded in the table below:

b. The students want to find a cooler that keeps the temperature inside the cooler more than 3 degrees below the freezing point of water (0°C) after 90 minutes. Indicate which of the tested coolers meets this goal, and explain why.
Answer:
More than 3 degrees below 0°C means less than – 3°C. The only cooler to keep the temperature less than – 3°C is Cooler c. Cooler c held a temperature of – 4.3°C which is to the left of – 3°C on the number line.

Question 5.
Mary manages a company that has been hired to flatten a plot of land. She took several elevation samples from the land and recorded those elevations below:

b. The table below shows how some other elevation samples compare to the level of the road: