Exploratory Challenge
Choose one of the colored points (C,D, …) that you marked. Draw the right triangle formed by the line segment connecting the original two points A and B and that colored point. Take a copy of the triangle, and rotate it 180˚ about the midpoint of \(\overline{A B}\).
Label the acute angles in the original triangle as x and y, and label the corresponding angles in the rotated triangle the same.
Todd says ACBC’ is a rectangle. Maryam says ACBC’ is a quadrilateral, but she is not sure it is a rectangle. Todd is right but does not know how to explain himself to Maryam. Can you help him out?
a. What composite figure is formed by the two triangles? How would you prove it?
Answer:
A rectangle is formed. We need to show that all four angles measure 90°. 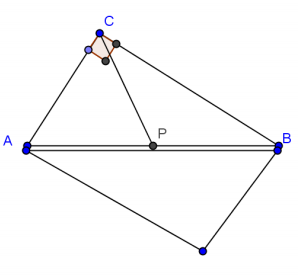 By definition, a circle is the set of all points in the plane that are the same distance from a given center point. Therefore, each colored point on the drawing lies on the circle with center P and a radius equal to half the length of the original line segment joining points A and B

Example
In the Exploratory Challenge, you proved the converse of a famous theorem in geometry. Thales’ theorem states the following: If A, B, and C are three distinct points on a circle, and \(\overline{A B}\) is a diameter of the circle, then ∠ACB is right.
Notice that, in the proof in the Exploratory Challenge, you started with a right angle (the corner of the colored paper) and created a circle. With Thales’ theorem, you must start with the circle and then create a right angle.
Prove Thales’ theorem.
a. Draw circle P with distinct points A, B, and C on the circle and diameter (AB) ̅. Prove that ∠ACB is a right angle.
Answer:
Sample image shown to the right. 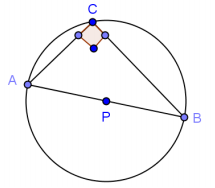 b. Draw a third radius (\(\overline{P C}\)). What types of triangles are △APC and △BPC? How do you know?
Answer:
They are isosceles triangles. Both sides of each triangle are radii of circle P and are, therefore, of equal length.

c. Using the diagram that you just created, develop a strategy to prove Thales’ theorem.
Answer:
Look at each of the angle measures of the triangles, and see if we can prove m∠ACB is 90°. 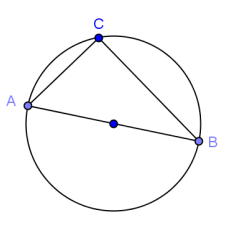 Exercise 2.
In the circle shown, \(\overline{B C}\) is a diameter with center A. 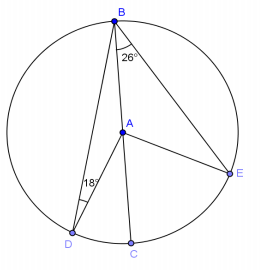 Question 1.
A, B, and C are three points on a circle, and angle ABC is a right angle. What is wrong with the picture below? Explain your reasoning. 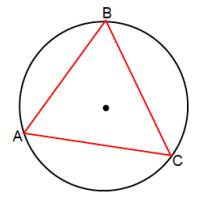 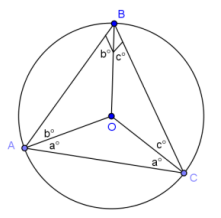 Question 2.
Show that there is something mathematically wrong with the picture below. 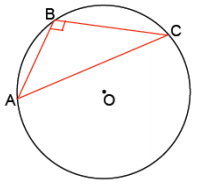 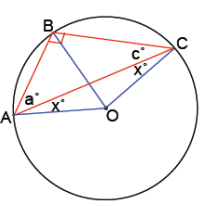 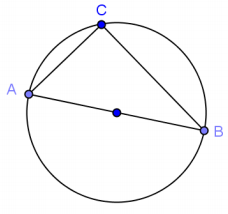 Question 4.
In the figure below, O is the center of the circle, and \(\overline{A D}\) is a diameter. 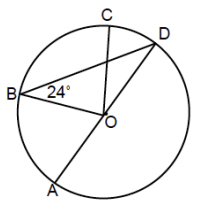 Question 5.
\(\overline{P Q}\) is a diameter of a circle, and M is another point on the circle. The point R lies on \(\overleftrightarrow{\boldsymbol{M Q}}\) such that RM = MQ. Show that m∠PRM = m∠PQM. (Hint: Draw a picture to help you explain your thinking.)
Answer:
Since RM = MQ (given), m∠RMP = m∠QMP (both are right angles, ∠QMP by Thales’ theorem and ∠RMP by the angle addition postulate), and MP = MP (reflexive property), then △PRM ≅ △PQM by SAS. It follows that ∠PRM ≅ ∠PQM (corresponding sides of congruent triangles) and that m∠PRM = m∠PQM (by definition of congruent angles).

Circle A is shown below.
1. Draw two diameters of the circle.
2. Identify the shape defined by the endpoints of the two diameters.
3. Explain why this shape is always the result. 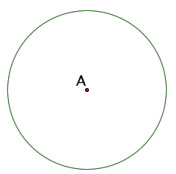 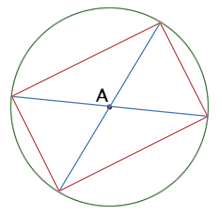