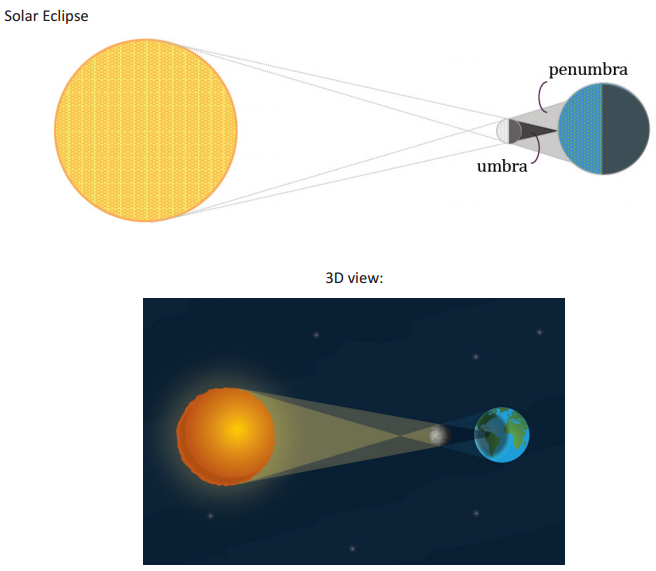 Answer:
Lead students through a conversation regarding the details of solar and lunar eclipses.
→ A total solar eclipse lasts only a few minutes because the sun and moon appear to be the same size.
→ How would appearances change if the moon were closer to the earth?
The moon would appear larger.

→ Sketch a diagram of a solar eclipse.

Students’ knowledge on eclipses varies. This is an opportunity for students to share what they know regarding eclipses. Allow a minute of discussion, and then guide them through a basic description of the moon’s shadow and how it is conical (in 3D view), but on paper in a profile view, the shadow appears as an isosceles triangle whose base coincides with the diameter of the earth. Discuss what makes the shadows of celestial bodies similar. Describe the two parts of the moon’s shadow, the umbra and penumbra.

Note that the distances are not drawn to scale in the following image. 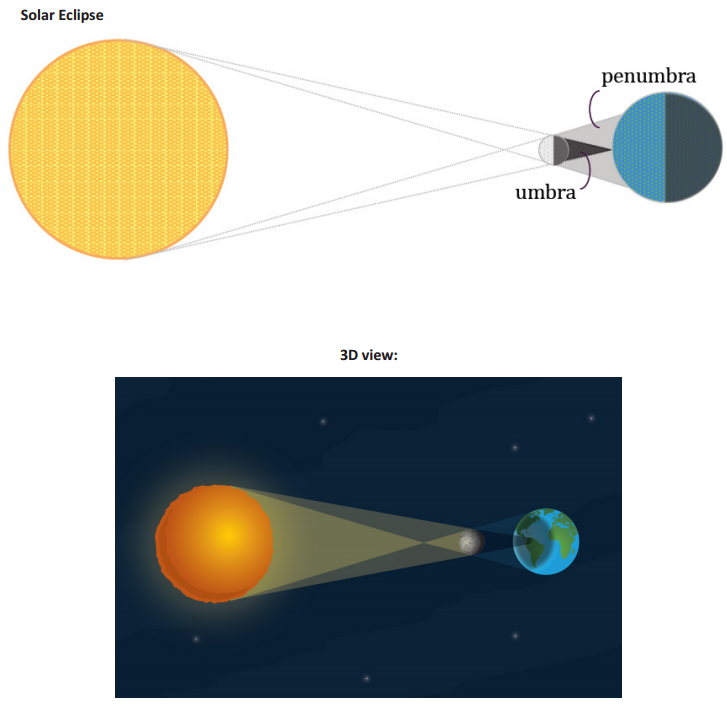 → We assume that shadows from the moon and the earth are all similar isosceles triangles.

This is, in fact, not the case for all planetary objects, as the shadow formed depends on how far away the light source is from the celestial body and the size of the planet. For the sake of simplification as well as approximation, this assumption is made. Then, shadows created by the moon and the earth will have the following relationship:

→ You can imagine simulating a solar eclipse using a marble that is one inch in diameter. If you hold it one arm length away, it will easily block (more than block) the sun from one eye. Do not try this; you will damage your eye!

→ To make the marble just barely block the sun, it must be about 9 feet (i.e., 108 inches) away from your eye. So the cone of shadow behind the marble tapers to a point, which is where your eye is, and at this point, the marble just blocks out the sun. This means that the ratio of the length of the shadow of the marble to the diameter of the marble is about 108: 1.

→ In fact, by experimenting with different-size spheres, we find that this ratio holds true regardless of the size of the sphere (or circular object) as long as the sphere is at the point where it just blocks the sun from our vantage point. In other words, whether you are using a marble, a tennis ball, or a basketball to model the eclipse, the distance the sphere must be held from the eye is 108 times the diameter of the sphere.

→ Let us now consider what is happening in a lunar eclipse. A lunar eclipse occurs when the moon passes behind the earth. Once again, the earth, sun, and moon lie on a straight line, but this time the earth is between the moon and the sun.

→ Consequently, during a lunar eclipse, the moon is still faintly visible from the earth because of light reflected off the earth.

→ Sketch a diagram of a lunar eclipse. 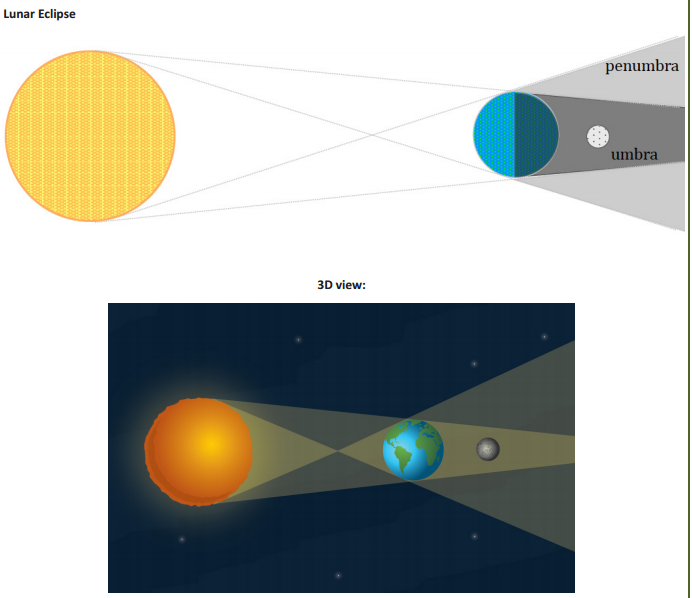 → Based on what we know about the ratio of distances for an object to just block the sun, we can conclude that the moon must be within 108 earth diameters; if it were not within that distance, it would not pass through the earth’s shadow, and the earth could not block the sun out completely.

→ Studying total lunar eclipses was critical to finding the distance to the moon. Other types of eclipses exist, but they involve the penumbra. The following measurement required a total eclipse, or one involving the umbra.

→ By carefully examining the shadow of the earth during a total lunar eclipse, it was determined that the width, or more specifically, the diameter of the cross section of the earth’s conical shadow at the distance of the moon, is about 2\(\frac{1}{2}\). moon diameters.

→ What length and angle relationships can we label in this diagram?

Pose the following questions one at a time, and allow students to discuss and mark their diagrams.

→ Based on what is known about the shadows of the moon and the earth, what do we know about the measures of ∠ABF and ∠BEC?
The angle measures are equal since we are assuming the shadows can be modeled by similar isosceles triangles.

→ What is the relationship between AF and AB?
Since the distance an object must be from the eye to block out the sun is 108 times the object’s diameter, the length of AB must be 108 times that of AF.

→ What is the relationship between AF and FD?
We know that the diameter of the cross section of the earth’s conical shadow at the distance of the moon is about 2\(\frac{1}{2}\) moon diameters, so the length of FD is 2.5 times the length of AF.

Allow students time to discuss why this must be true, using the relationships determined in the diagram. Share out ideas
before explaining further.

→ We know that mz.ABF mz.BEC since the shadows are similar triangles. This means that \(\overline{A B}\) is parallel to \(\overline{D C}\) (alternate interior angles).

→ With some careful observation and measurement (that of a lunar eclipse) and basic geometry, Aristarchus was able to determine a fairly accurate measure of the distance from the earth to the moon.

Question 1.
If the sun and the moon do not have the same diameter, explain how the sun’s light can be covered by the moon during a solar eclipse.
Answer:
The farther away an object is from the viewer, the smaller that object appears. The moon is closer to the earth than the sun, and it casts a shadow where it blocks some of the light from the sun. The sun is much farther away from the earth than the moon, and because of the distance, it appears much smaller in size.

Question 2.
What would a lunar eclipse look like when viewed from the moon?
Answer:
The sun would be completely blocked out by the earth for a time because the earth casts an umbra that spans a greater distance than the diameter of the moon, meaning the moon would be passing through the earth’s shadow. 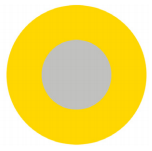 The diameter of the moon is represented by distance PQ. For me to view a total eclipse, where the sun is just blocked by the moon, the moon would have to be twice as wide, so TU = 2 (P Q). ∆ TIU and ∆ YI’X are both isosceles triangles, and their vertex angles are the same, so the triangles are similar by the SAS criterion.

Question 1.
On Planet A, a\(\frac{1}{4}\)-inch diameter ball must be held at a height of 72 inches to just block the sun. If a moon orbiting
Planet A just blocks the sun during an eclipse, approximately how many moon diameters is the moon from the planet?
Answer:
The ratio of the diameter of the ball to the specified height is \(\frac{\frac{1}{4}}{72}=\frac{1}{288}\). The moon’s distance in order to just block the sun would be proportional since the shadows formed are similar triangles, so the moon would orbit approximately 288 moon diameters from Planet A.