Exploratory Challenge
You need a pair of scissors and a ruler.
Cut out the 75° angle on the right, and use it as a guide to rotate the figure below 75° counterclockwise around the given center of rotation (Point P).
→ Place the vertex of the 75° angle at point P. 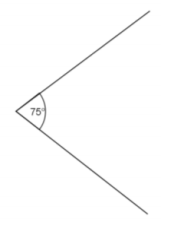 → Line up one ray of the 75° angle with vertex A on the figure. Carefully measure the length from point P to vertex A.
→ Measure that same distance along the other ray of the reference angle, and mark the location of your new point, A’.
→ Repeat these steps for each vertex of the figure, labeling the new vertices as you find them.
→ Connect the six segments that form the sides of your rotated image. 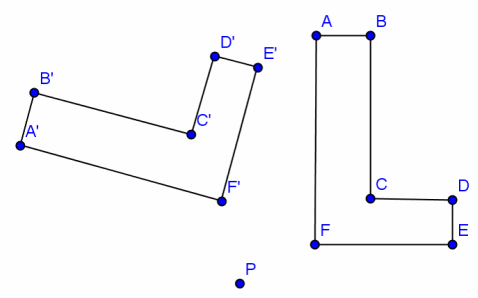 Discussion
In Grade 8, we spent time developing an understanding of what happens in the application of a rotation by participating in hands-on lessons. Now, we can define rotation precisely.

The notion of the entire plane being subject to the transformation is new and should be reinforced. However, note that neither the figure nor the plane is actually moved in the transformation. The image represents the output after applying the transformation rule to the input points.
In the definition below, students may benefit from some discussion using a visual of a clock. Discuss the intuitive notion of directions on a clock before the more formal definition. 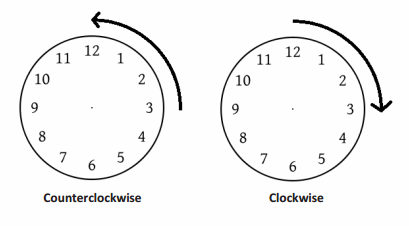 A rotation of 0 degrees around the center C is the identity transformation (i.e., for all points A in the plane, it is the rotation defined by the equation RC,0(A)=A).
A rotation of 180° around the center C is the composition of two rotations of 90° around the center C. It is also the transformation that maps every point P (other than C) to the other endpoint of the diameter of a circle with center C and radius CP.
→ A rotation leaves the center point C fixed. RC,θ(C)=C states exactly that. The rotation function R with center point C that moves everything else in the plane θ° leaves only the center point itself unmoved.
→ Any other point P in the plane moves the exact same degree arc along the circle defined by the center of rotation and the angle θ°.
→ Then RC,θ(P) is the point Q that lies in the counterclockwise half-plane of ray \(\overrightarrow{C P}\) such that CQ=CP and such that m∠PCQ=θ°. Visually, you can imagine rotating the point P in a counterclockwise arc around a circle with center C and radius CP to find the point Q.
→ All positive angle measures θ assume a counterclockwise motion; if citing a clockwise rotation, the answer should be labeled with CW.

A composition of two rotations applied to a point is the image obtained by applying the second rotation to the image of the first rotation of the point. In mathematical notation, the image of a point A after a composition of two rotations of 90° around the center C can be described by the point RC,90 (RC,90(A)). The notation reads, “Apply RC,90 to the point RC,90(A).” So, we lose nothing by defining RC,180(A) to be that image. Then, RC,180(A) = RC,90(RC,90(A)) for all points A in the plane.

As this is our first foray into close work with rigid motions, we emphasize an important fact about rotations. Rotations are one kind of rigid motion or transformation of the plane (a function that assigns to each point P of the plane a unique point F(P)) that preserves lengths of segments and measures of angles. Recall that Grade 8 investigations involved manipulatives that modeled rigid motions (e.g., transparencies) because you could actually see that a figure was not altered, as far as length or angle was concerned. It is important to hold onto this idea while studying all of the rigid motions.

Constructing rotations precisely can be challenging. Fortunately, computer software is readily available to help you create transformations easily. Geometry software (such as Geogebra) allows you to create plane figures and rotate them a given number of degrees around a specified center of rotation. The figures in the exercises were rotated using Geogebra. Determine the angle and direction of rotation that carries each pre-image onto its (dashed-line) image. Assume both angles of rotation are positive. The center of rotation for Exercise 1 is point D and for Figure 2 is point E.

(Remind students that identifying either CCW or CW degree measures is acceptable; if performing a 30° rotation in the clockwise direction, students can label their answers as 30° CW or -30°.) 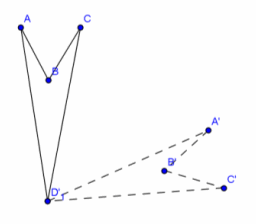 To determine the angle of rotation, you measure the angle formed by connecting corresponding vertices to the center point of rotation. In Exercise 1, measure ∠AD’A’. What happened to ∠D? Can you see that D is the center of rotation, therefore, mapping D’ onto itself? Before leaving Exercise 1, try drawing ∠BD’B’. Do you get the same angle measure? What about ∠CD’C’?

Try finding the angle and direction of rotation for Exercise 2 on your own. 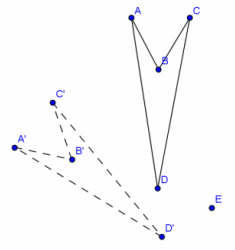 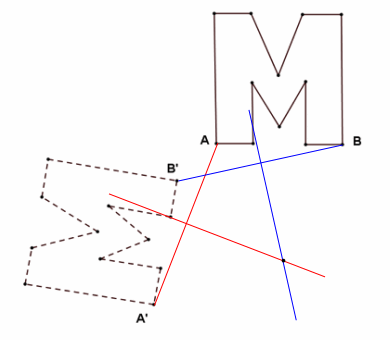 Justify your construction by measuring ∠APA’ and ∠BPB’. Did you obtain the same measure?
Answer:
Yes

This method works because a chord of a circle is a segment joining two points on a circle. The endpoints of the chord are equidistant from the center of the circle. The perpendicular bisector of a chord (being the set of all points equidistant from the endpoints) includes the center of the circle. Since students may have had limited experience studying circles, they may have difficulty understanding why this works. Consider pointing out or sketching the circle that has the center of rotation as its center, for each of the examples, to supply some justification for why it works. 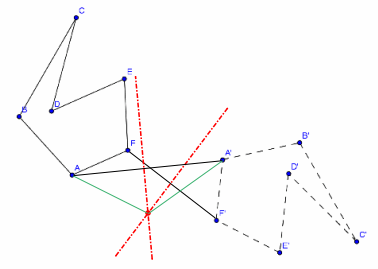 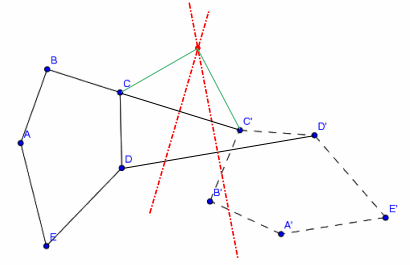 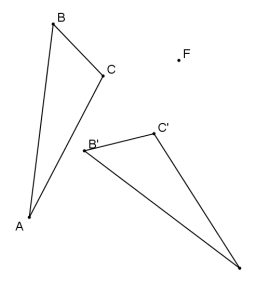 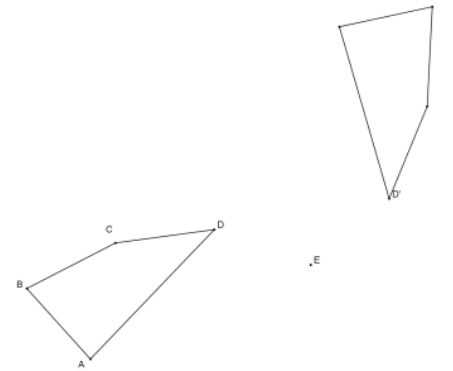 Question 5.
On your paper, construct an equilateral triangle. Locate the midpoint of one side using your compass. Rotate the triangle 180° around this midpoint. What figure have you formed?
Answer:
The figure formed is a rhombus.

Question 6.
Use either your own initials (typed using WordArt in Microsoft Word) or the initials provided below. If you create your own WordArt initials, copy, paste, and rotate to create a design similar to the one below. Find the center of rotation and the angle of rotation for your rotation design.
Answer: 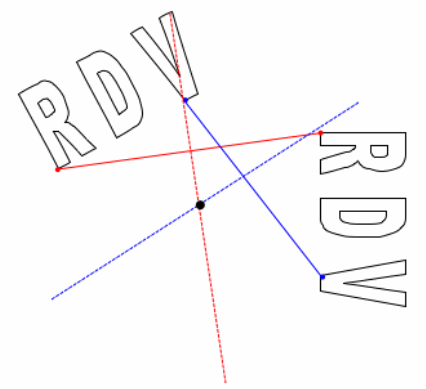 Find the center of rotation and the angle of rotation for the transformation below that carries A onto B. 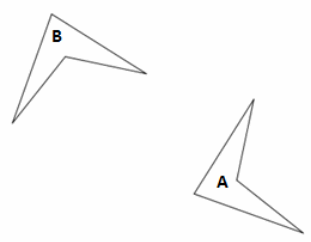 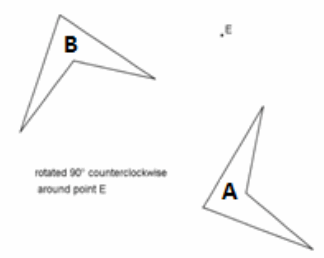