Opening Exercise
Joe and Marty are in the park playing catch. Tony joins them, and the boys want to stand so that the distance between any two of them is the same. Where do they stand?
How do they figure this out precisely? What tool or tools could they use?

Note that because a circle is defined in terms of a distance, r, we often use a distance when naming the radius (e.g., “radius AB”). However, we may also refer to the specific segment, as in “radius \(\overline{A B}\)”.

Example 1.
Sitting Cats
You need a compass and a straightedge.
Margie has three cats. She has heard that cats in a room position themselves at equal distances from one another and wants to test that theory. Margie notices that Simon, her tabby cat, is in the center of her bed (at S), while JoJo, her Siamese, is lying on her desk chair (at J). If the theory is true, where will she find Mack, her calico cat? Use the scale drawing of Margie’s room shown below, together with (only) a compass and straightedge. Place an M where Mack will be if the theory is true. 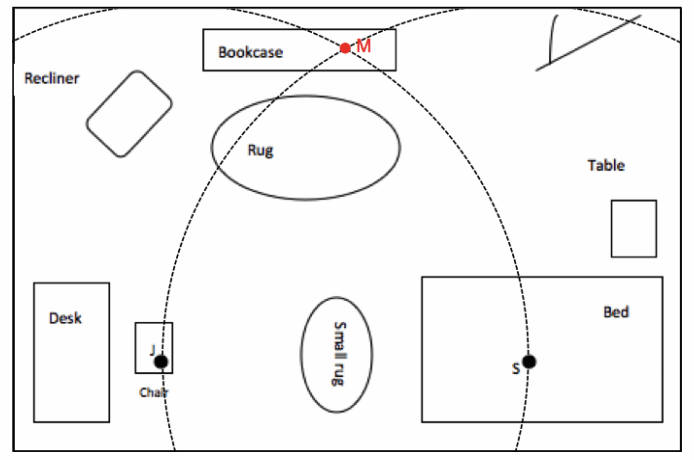 Mathematical Modeling Exercise: Euclid, Proposition 1
Let’s see how Euclid approached this problem. Look at his first proposition, and compare his steps with yours.

In this margin, compare your steps with Euclid’s.

To construct an equilateral triangle on a given finite straight-line. 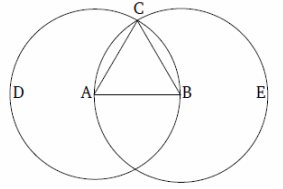 Thus, the triangle ABC is equilateral, and has been constructed on the given finite straight-line AB. (Which is) the very thing it was required to do.

Under what conditions (in terms of distances AB, CD, AC) do the circles have
a. One point in common?
Answer:
If AB+CD=AC or AC+AB=CD or AC+CD=AB.

b. No points in common?
Answer:
If AB+CD

d. More than two points in common? Why?
Answer:
If A=C (same points) and AB=CD. All the points of the circle coincide since the circles themselves coincide.

Question 3.
You need a compass and a straightedge.
Cedar City boasts two city parks and is in the process of designing a third. The planning committee would like all three parks to be equidistant from one another to better serve the community. A sketch of the city appears below, with the centers of the existing parks labeled as P1 and P2. Identify two possible locations for the third park, and label them as P3a and P3b on the map. Clearly and precisely list the mathematical steps used to determine each of the two potential locations.
Answer:
1. Draw a circle P1: center P1, radius \(\overline{P_{1} P_{2}}\).
2. Draw a circle P2: center P2 radius \(\overline{\boldsymbol{P}_{2} \boldsymbol{P}_{1}}\).
3. Label the two intersections of the circles as P3a and P3b.
4. Join P1, P2, P3a and P1, P2, P3b. 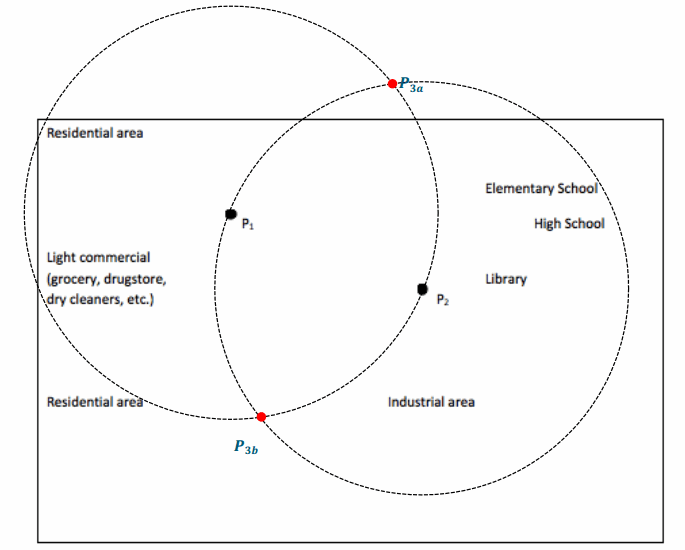