The following table contains U.S. population data for the two most recent census years, 2000 and 2010.

a. Steve thinks the data should be modeled by a linear function.

b. Phillip thinks the data should be modeled by an exponential function.

c. Who has the correct model? How do you know?
Answer:
You cannot determine who has the correct model without additional information. However, populations over longer intervals of time tend to grow exponentially if environmental factors do not limit the growth, so Phillip’s model is likely to be more appropriate.

This challenge continues to examine U.S. census data to select and refine a model for the population of the United States over time.

Exercise 1.
The following table contains additional U.S. census population data. Would it be more appropriate to model this data with a linear or an exponential function? Explain your reasoning. 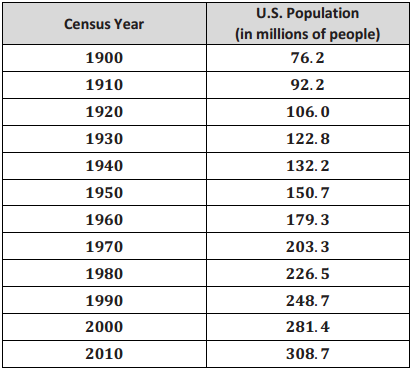 Answer:
It is not clear by looking at a graph of this data whether it lies on an exponential curve or a line. However, from the context, we know that populations tend to grow as a constant factor of the previous population, so we should use an exponentialfunction to model it. The graph below uses t = 0 to represent the year 1900. OR 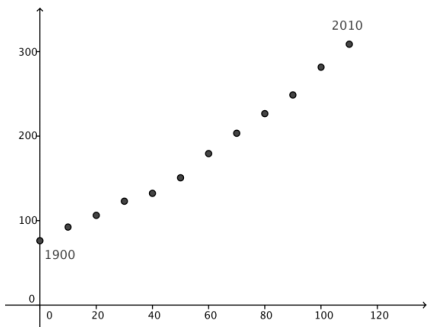 Exercise 2.
Use a calculator’s regression capability to find a function, f, that models the U.S. Census Bureau data from 1900 to 2010.
Answer:
Using a graphing calculator and letting the year 1900 corresponding to t = 0 gives the following exponential regression equation.
P(t) = 81.1(1.0126)t

Exercise 3.
Find the growth factor for each 10-year period and record it in the table below. What do you observe about these growth factors? 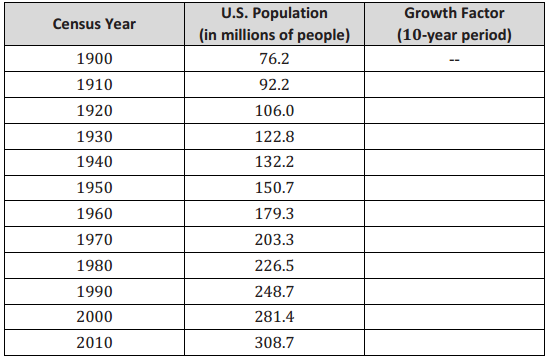 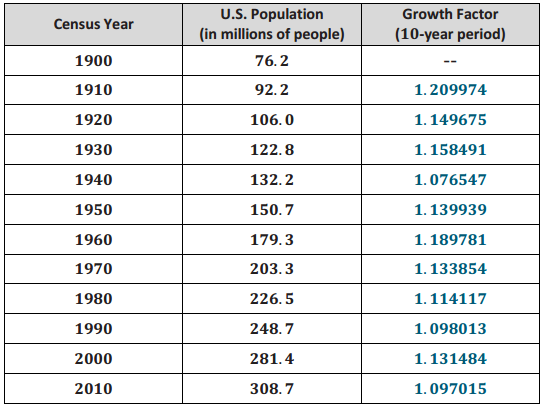 The growth factors are fairly constant around 1.1.

Exercise 6.
You have now computed three potential models for the population of the United States over time: functions E, f, and g. Which one do you expect would be the most accurate model based on how they were created? Explain your reasoning.
Answer:
Student responses will vary. Potential responses:
→ I expect that function f that we found through exponential regression on the calculator is the most accurate because it uses all of the data points to compute the coefficients of the function.
→ I expect that the function E is most accurate because it uses only the most recent population values.

Exercise 10.
Which of the three functions is the best model to use for the U.S. census data from 1900 to 2010? Explain your reasoning.
Answer:
Student responses will vary.
Possible response:
Graphing all three functions together with the data, we see that function f appears to be the closest to all of the data points. 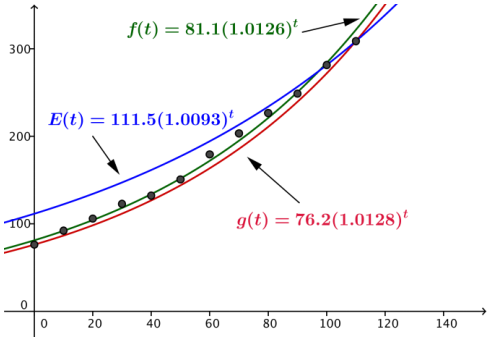 Exercise 11.
The U.S. Census Bureau website http://www.census.gov/popclock displays the current estimate of both the United States and world populations.

a. What is today’s current estimated population of the U.S.?
Answer:
This will vary by the date. The solution shown here uses the population 318.7 million and the date August 16, 2014.

c. Which of the functions E, f, and g gives the best estimate of today’s population? Does that match what you expected? Justify your reasoning.
Answer:
E(114.62) = 322.2
f(114.62) = 340.7
g(114.62) = 327.4
The function E gives the closest value to today’s estimated population, but all three functions produce estimates that are too high. Possible response: I had expected that function f, which was obtained through regression, to produce the closest population estimate, so this is a surprise.

d. With your group, discuss some possible reasons for the discrepancy between what you expected in Exercise 8 and the results of part (c) above.
Answer:
Student responses will vary.

Exercise 13.
Based on your work so far, do you think this is an accurate prediction? Justify your reasoning.
Answer:
Student responses will vary. Possible response: From what we know of population growth, the data should most likely be fit with an exponential function, however, the growth rate appears to be decreasing because the models that use all of the census data produce estimates for the current population that are too high.

I think the population will reach half a billion sometime after the year 2062 because the U.S. Census Bureau expects the growth rate to slow down. Perhaps the United States is reaching its capacity and cannot sustain the same exponential rate of growth into the future.

Exercise 14.
Here is a graph of the U.S. population since the census began in 1790. Which type of function would best model this data? Explain your reasoning. 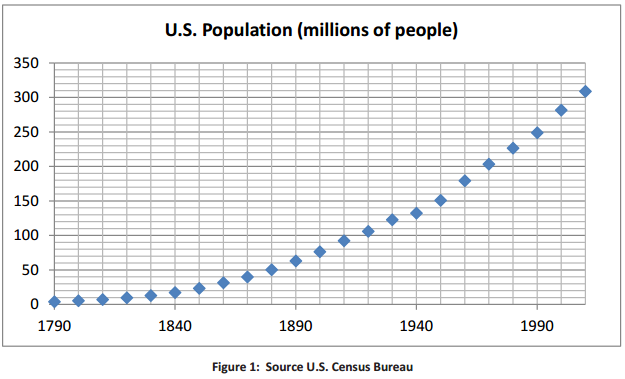 Answer:
The shape of the curie indicates that an exponential model would be the best choice. You could model the data for short periods of time using a series of piecewise linear functions, but the average rate of change in the early years is clearly less than that in later years. A linear model would also not make sense because at some point in the past you would have had a negative number of people living in the U.S.

Exercise 15.
The graph below shows the population of New York City during a time of rapid population growth. 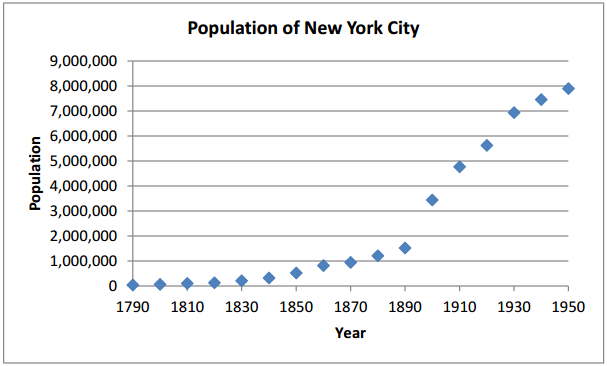 e. Based on the graph, do you think an exponential growth function would be useful for predicting the population of New York in the years after 1950?
Answer:
The graph appears to be increasing but curving downwards, and an exponential model with a base greater than 1 would always be increasing at an increasing rate, so its graph would curve upwards. The difference between the function and the data would be increasing, so this is probably not an appropriate model.

Exercise16.
Suppose each function below represents the population of a different U.S. city since the year 1900.

a. Complete the table below. Use the properties of exponents to rewrite expressions as needed to help support your answers.

d. Which of these functions might realistically represent city population growth over an extended period of time?
Answer:
Based on the United States and New York City data, it is unlikely that a city in the United States could sustain a 50% growth rate every two years for an extended period of time as indicated by function B and its predicted population in the year 2000. The other functions seem more realistic, with annual growth or decay rates similar to other city populations we examined.

Question 1.
Does each pair of formulas described below represent the same sequence? Justify your reasoning.

Question 2.
Tina is saving her babysitting money. She has $500 in the bank, and each month she deposits another $100. Her account earns 2% interest compounded monthly.

a. Complete the table showing how much money she has in the bank for the first four months.

Question 3.
Assume each table represents values of an exponential function of the form f(t) = a(b)ct where b is a positive real number and a and c are real numbers. Use the information in each table to write a formula for f in terms of t for parts (a) – (d).

Question 6.
Loggerhead turtles reproduce every 2 – 4 years, laying approximately 120 eggs in a clutch. Studying the local population, a biologist records the following data in the second and fourth years of her study:

c. Do your sequence from part (a) and your function from part (b) model the same thing? Explain how you know.
Answer:
The function models the amount of seaborgium-266 as it constantly decreases every fraction of a second, and the sequence models the amount of seaborgium-266 that remains only in 30-second intervals. They model nearly the same thing, but not quite. The function is continuous and the sequence is discrete.

Question 8.
Strontium-90, magnesium-28, and bismuth all decay radioactively at different rates. Use the data provided in the graphs and tables below to answer the questions that follow. 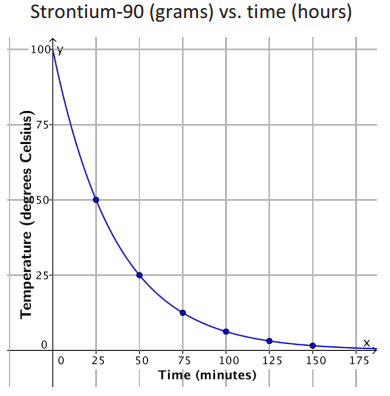 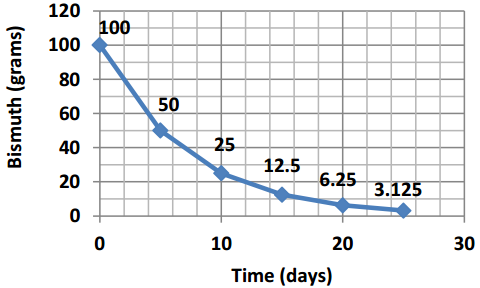 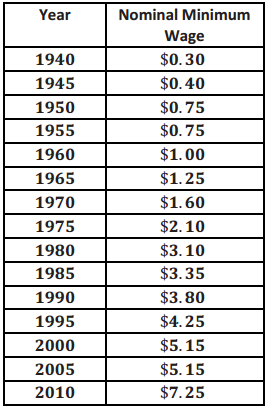 Answer:
Student solutions will vary. The inflation-adjusted minimum wage is dearly not exponential because it does not strictly increase or decrease. The other data when graphed does appear roughly exponential, and a good model would be f(t) = 0.40(1.044)t

Question 11.
A dangerous bacterial compound forms in a closed environment but is immediately detected. An initial detection reading suggests the concentration of bacteria in the closed environment is one percent of the fatal exposure level. Two hours later, the concentration has increased to four percent of the fatal exposure level.

b. Doctors and toxicology professionals estimate that exposure to two-thirds of the bacteria’s fatal concentration level will begin to cause sickness. Offer a time limit (to the nearest minute) for the inhabitants of the infected environment to evacuate in order to avoid sickness.
Answer:
66.66 = 2t
log(66.66) = t. log(2)
t = \(\frac{\log (66.66)}{\log (2)}\) ≈ 6.0587
Inhabitants should evacuate before 6 hours and 3 minutes.

Question 12.
Data for the number of users at two different social media companies is given below. Assuming an exponential growth rate, which company is adding users at a faster annual rate? Explain how you know.

Question 1.
The table below gives the average annual cost (e.g., tuition, room, and board) for four-year public colleges and universities. Explain why a linear model might not be appropriate for this situation. 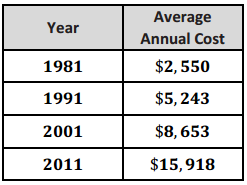 Answer:
A linear function would not be appropriate because the average rate of change is not constant.