The youth group from Example 1 is given the option of investing their money at 2.976% interest per year, compounded monthly instead of depositing it in the original account earning 3. 0% compounded yearly.

Question 1.
Write each recursive sequence in explicit form. Identify each sequence as arithmetic, geometric, or neither.

Question 2.
Write each sequence in recursive form. Assume the first term is when n = 1.

a. What type of sequence do the Bank A balances represent?
Answer:
The balances in Bank A represent an arithmetic sequence with constant difference of $30.

c. What type of sequence do the Bank B balances represent?
Answer:
The balances in Bank B represent a geometric sequence with common ratio of 1.025. 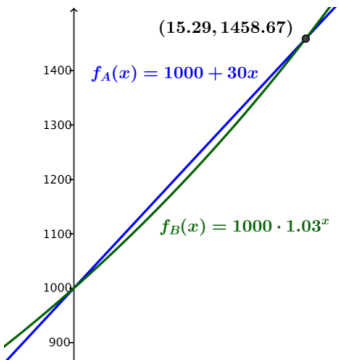 Question 4.
You decide to invest your money in a bank that uses continuous compounding at 5.5% Interest per year. You have $500.

Question 5.
Use the properties of exponents to identify the percent rate of change of the functions below, and classify them as modeling exponential growth or decay. (The first two problems are done for you.)

This means that half of any sample of uranium-235 transforms into lead-207 in 704 million years. We can assume that radioactive decay is modeled by an exponential decay with a constant decay rate.

b. Does the formula that you wrote in part (a) work for any radioactive element? Why?
Answer:
Since m represents the number of half-lives, this should be an appropriate formula for any decaying element.

Question 8.
Doug drank a cup of tea with 130 mg of caffeine. Each hour, the caffeine in Doug’s body diminishes by about 12%. (This rate varies between 6% and 14% depending on the person.)

c. The world population reached 7 billion October 31, 2011, according to the United Nations. Is the model reasonably accurate?
Answer:
Student responses will vary. The model was accurate to within three years, so, yes, it is reasonably accurate.

Question 11.
When paying off loans, the monthly payment first goes to any interest owed before being applied to the remaining balance. Accountants and bankers use tables to help organizing their work.

a. Consider the situation that Fred is paying off a loan of $125,000 with an interest rate of 6% per year compounded monthly. Fred pays $749.44 every month. Complete the following table:

Question 1.
April would like to invest $200 in the bank for one year. Three banks all have a nominal APR of 1.5% but compound the interest differently.

d. Each bank decides to double the nominal APR It offers for one year. That is, they offer a nominal APR of 3%. Each bank advertises, “DOUBLE THE AMOUNT YOU EARN !“ For which of the three banks, if any, is this advertised claim correct?
Answer:
Bank A:
I = 200 . 0.03 = 6