b. Graph and label the midline on your graph. Draw and label a segment to represent the period and specify its length.
Answer:

Question 2.
The graph below shows the number of daylight hours each day of the year in Fairbanks, Alaska, as a function of the day number of the year. (January 1 is day 1, January 2 is day 2, and so on.) 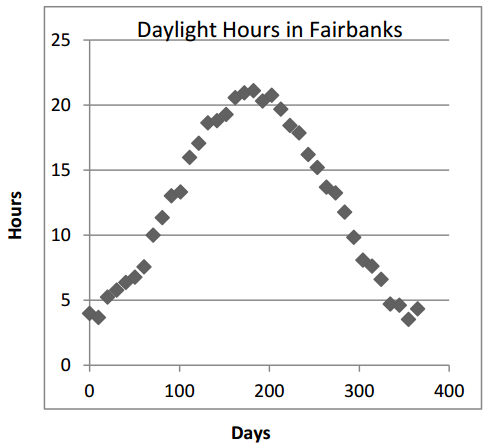 a. Find a function that models the shape of this daylight-hour curve reasonably well. Define the variables you use.
Answer:
Once we have the midline and realize that this is a periodic function, we expect the curve to be a sine or cosine function. It looks like an upside-down cosine graph, so the function will be in the form H(d) = -Acos(ωd) + k, where d is the number of days, k is the height of the midline, A is the distance between the peak (which looks to be about 21) and the midline, and p = \(\frac{2 \pi}{\omega}\) is the period. So, we have

Here, the function H is the number of hours of daylight (in units of hours), and d is the day number as defined at the beginning of the question.
[NOTE: Variations of this formula such as a sine function with a phase shift are possible.]

e. The scientists who reported these data now inform us that their instruments were incorrectly calibrated; each measurement of the daylight hours is 15 minutes too long. Adjust your function from part (a) to account for this change in the data. How does your function now appear? Explain why you changed the formula as you did.
Answer:
To correct the measurement, you need to take away \(\frac{1}{4}\) hours of daylight from each measurement so that it lowers the midline by \(\frac{1}{4}\) hours: H(d) = –\(\frac{17}{2}\) cos(\(\)d) + 12\(\frac{1}{4}\).

g. Do these two adjustments to the function significantly change the prediction as to which day of the year first possesses 17.5 hours of daylight?
Answer:
Using the new function and repeating the calculations as in part (d), we have

Which is not a great change between the two predictions (the difference is less than 0.3 hours), but the function definitely seems to be more accurate with this additional information.

Question 3.
On a whim, James challenged his friend Susan to model the movement of a chewed-up piece of gum stuck to the rim of a rolling wheel with radius 1 m. To simplify the situation, Susan drew a diagram of a circle to represent the wheel and imagined the gum as a point on the circle. Furthermore, she assumed that the center of the wheel was moving to the right at a constant speed of 1 m/sec, as shown in the diagram. 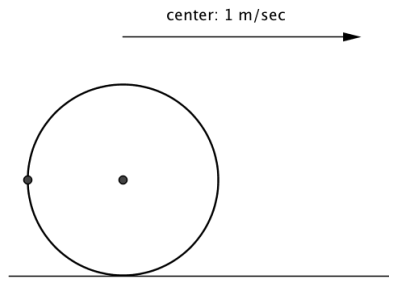 At time t = 0 seconds, the piece of gum was directly left of the center of the wheel, as indicated in the diagram above.
a. What is the first time that the gum was at the top position of the wheel?
Answer:
Since the wheel was rolling at 1 meter per second, it made a complete turn after 2π seconds, rotating clockwise at a constant rate of 1 radian per second. Hence, the top position was reached after the gum has rotated \(\frac{\pi}{2}\) radians, which occurs at time \(\frac{\pi}{2}\) seconds.

b. What is the first time that the gum was again directly to the left of the center of the wheel?
Answer:
The gum did one complete turn, which occurred after the gum had rotated 2π radians, which is at time 2π seconds. 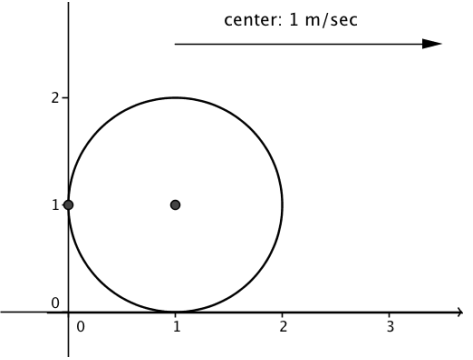 Question 4.
Betty was looking at the Pythagorean Identity: for all real numbers θ,
sin2(θ) + cos2(θ) = 1.
a. Betty used the Pythagorean identity to make up the equation below. She then stated, “Wow, I’ve discovered a new identity that is true for all θ.” Do you agree with her? Why or why not?
\(\frac{\sin ^{2}(\theta)}{1-\cos (\theta)}\) = 1 + cos(θ)
Answer:
This is not an identity for all values of θ because the expressions on each side of the equation, thought of as functions, have different domains. The domain of the function on the left excludes 0 (and other places where the cosine is 1), whereas the one on the right does not.

b. Prove the Pythagorean identity.
Answer:
For any real number θ, rotate the initial ray (given by the positive x-axis) by θ radians The image of the intial ray under that rotation intersects the unit circle at that point (x, y). By definition, cos(θ) = x and sin(θ) = y. However, the point (x, y) is also a point on the unit circle, so it satisfies the equation x2 + y2 = 1. Substituting cos(θ) for x and sin(θ) for y into this equation yields the desired identity.