Example 1.
In a study of the activities of dolphins, a marine biologist made a 24 – second video of a dolphin swimming and jumping in the ocean with a specially equipped camera that recorded one dolphin’s position with respect to time. This graph represents a piecewise function, y = f(t), that is defined by quadratic functions on each interval. It relates the dolphin’s vertical distance from the surface of the water, in feet, to the time from the start of the video, in seconds. Use the graph to answer the questions below. 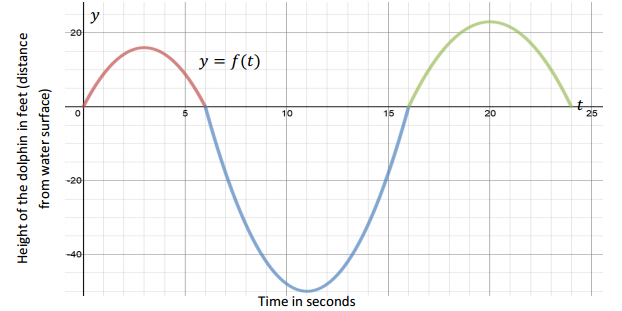 c. How long was the dolphin swimming under water in the recorded time period? Explain your answer or show your work.
Answer:
10 seconds. Between t = 6 and t = 16, f(t) < 0. This means that the dolphin is below the surface of the water.

e. Locate the point on the graph where f(t) = – 50, and explain what information the coordinates of that point give you in the context of this problem.
Answer:
f(11) = – 50. This means after 11 seconds have passed, the dolphin is 50 feet below the water surface. 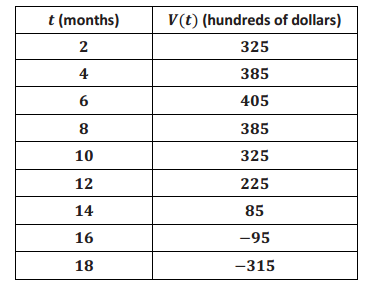 a. What kind of function could model the data in this table? How can you support your conclusion?
Answer:
Students can make the conjecture that it might be quadratic based on the shape suggested by plotting the points or by noticing the suggested symmetry of the data. However, they should not make a claim that all U – shaped curves can be well modeled by a quadratic function. A more robust support would be to notice that the sequence of V(t) values has constant second differences over equally spaced intervals of t, which is the characteristic of sequences defined by a quadratic expression.

b. Assuming this data is in fact quadratic, how much did Andrew invest in his stock initially? Explain how you arrived at this answer.
Answer:
Andrew initially invested $225. I used the symmetric value of the quadratic function to find that V(0) = V(12) = 225.

d. If the pattern continues to follow the quadratic trend shown above, do you advise Andrew to sell or keep his stock portfolio? Explain why.
Answer:
Andrew should sell. The stock initially increased, reaching a maximum value of $405, then decreased. Since this is a quadratic function, it will not increase again. Rather, it continuously decreases after reaching the maximum.

Question 1.
Pettitte and Ryu each threw a baseball into the air.
The vertical height of Pettitte’s baseball is represented by the graph y = P(t) below. P represents the vertical distance of the baseball from the ground in feet, and t represents time in seconds. 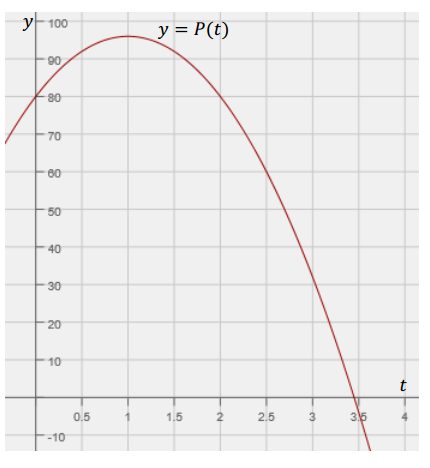 The vertical height of Ryu’s baseball is represented by the table values R(t) below. R represents the vertical distance of the baseball from the ground in feet, and t represents time in seconds. 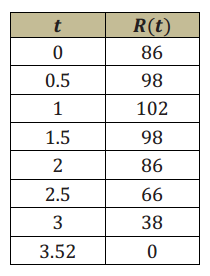 c. Pettitte claims that his ball reached its maximum faster than Ryu’s. Is his claim correct or incorrect? Explain your answer.
Answer:
Pettitte’s claim is incorrect. It took both balls 1 second to reach their maximum heights. Students recognize that even though the vertex is different, both functions have the same axis of symmetry.

e. Ryu claims that he can throw the ball higher than Pettitte. Is his claim correct or incorrect? Explain your answer.
Answer:
Ryu’s claim is incorrect. Even though Ryu’s ball reached maximum height of 102 ft., he started from higher above the ground. He was initially at 86 ft. above the ground. Ryu and Pettitte both threw the ball 16 ft. vertically from their initial positions. Students need to interpret the vertex value in relation to the y – intercept.

Question 1.
A toy company is manufacturing a new toy and trying to decide on a price that maximizes profit. The graph below represents profit (P) generated by each price of a toy (x). Answer the questions based on the graph of the quadratic function model. 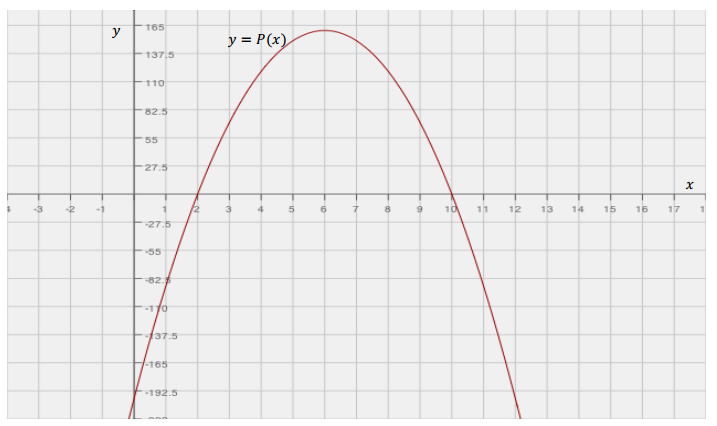 a. If the company wants to make a maximum profit, what should the price of a new toy be?
Answer:
$6

b. What is the minimum price of a toy that produces profit for the company? Explain your answer.
Answer:
The price of a toy must be more than $2 to generate a profit. $2 causes the company to break even and not make any profit.

c. Estimate the value of P(0), and explain what the value means in the problem and how this may be possible.
Answer:
P(0) is approximately – $192.50. Students should interpret an x – value of zero as the toy being given away for free. There is no way to say with certainty what the value P(0) = – 192.50 represents in this context because we do not know what assumptions were made about how many of the toys would be produced at each price point. We only know what the company concluded about their profit at each price point. It is quite likely that the model is only useful for the domain (2, 10) in this context.