Example 1.
a. Malik bought a new car for $15,000. As he drove it off the lot, his best friend, Will, told him that the car’s value just dropped by 15% and that it would continue to depreciate 15% of its current value each year. If the car’s value is now $12,750 (according to Will), what will its value be after 5 years?
Complete the table below to determine the car’s value after each of the next five years. Round each value to the nearest cent.

b. Write an explicit formula for the sequence that models the value of Malik’s car t years after driving it off the lot.
Answer:
v(t) = 12750(0.85)t

c. Use the formula from part (b) to determine the value of Malik’s car five years after its purchase. Round your answer to the nearest cent. Compare the value with the value in the table. Are they the same?
Answer:
v(t) = 12750(0.85)5 ≈ 5657.24 It is approximately the same value. Note that small differences could be attributed to rounding.

Exercise 1.
Identify the initial value in each formula below, and state whether the formula models exponential growth or exponential decay. Justify your responses.
a. f(t) = 2(\(\frac{2}{5}\))t
Answer:
a = 2; decay; b < 1

Exercise 5.
Kelli’s mom takes a 400 mg dose of aspirin. Each hour, the amount of aspirin in a person’s system decreases by about 29%. How much aspirin is left in her system after 6 hours?
Answer:
51 mg

Exercise 6.
According to the International Basketball Association (FIBA), a basketball must be inflated to a pressure such that when it is dropped from a height of 1,800 mm, it rebounds to a height of 1,300 mm. Maddie decides to test the rebound – ability of her new basketball. She assumes that the ratio of each rebound height to the previous rebound height remains the same at \(\frac{1300}{1800}\). Let f(n) be the height of the basketball after n bounces. Complete the chart below to reflect the heights Maddie expects to measure. 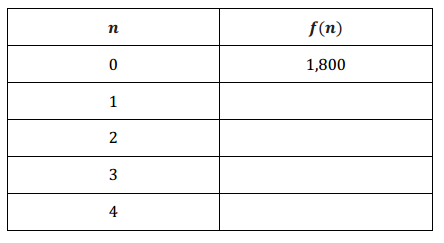 b. Plot the points from the table. Connect the points with a smooth curve, and then use the curve to estimate the bounce number at which the rebound height drops below 200 mm. 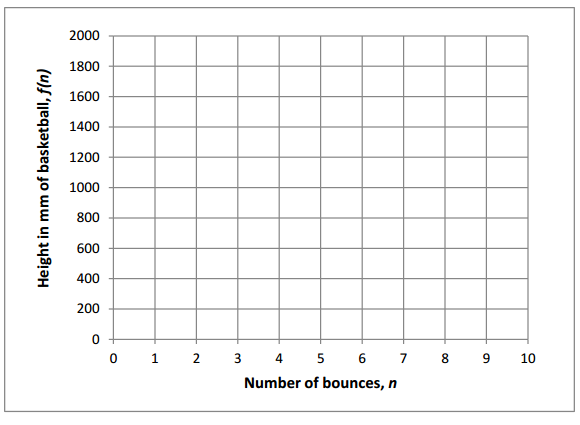 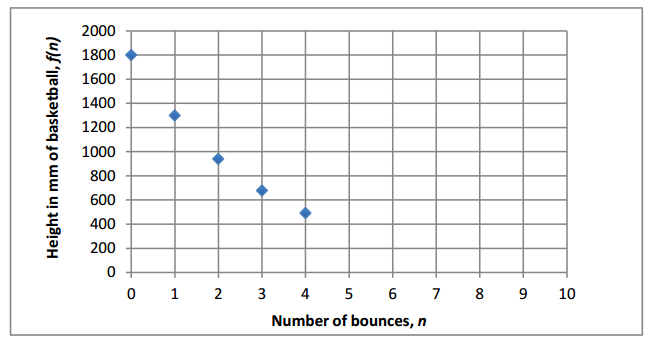 At the seventh rebound, the rebound height falls below 200 mm. 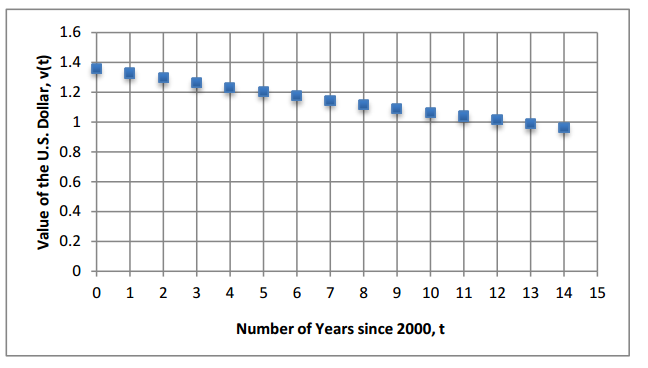 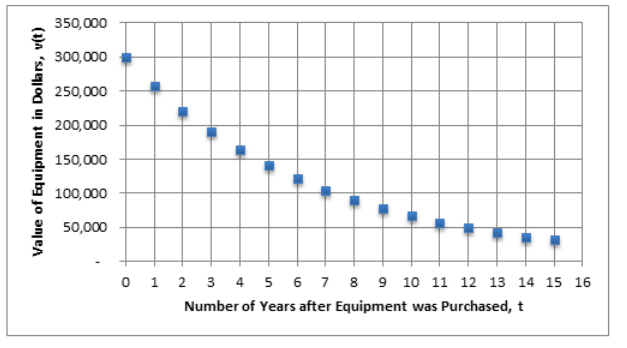 Question 4.
Doug drank a soda with 130 mg of caffeine. Each hour, the caffeine in the body diminishes by about 12%.
a. Write a formula to model the amount of caffeine remaining in Doug’s system each hour.
Answer:
c(t) = 130(0.88)t, where t is the number of hours after Doug drinks the beverage

b. How much caffeine remains in Doug’s system after 2 hours?
Answer:
101 mg

c. How long will it take for the level of caffeine in Doug’s system to drop below 50 mg?
Answer:
8 hours

Question 5.
64 teams participate in a softball tournament in which half the teams are eliminated after each round of play.
a. Write a formula to model the number of teams remaining after any given round of play.
Answer:
t(n) = 64(0.5)n, where n is the number of rounds played

b. How many teams remain in play after 3 rounds?
Answer:
8 teams

c. How many rounds of play will it take to determine which team wins the tournament?
Answer:
6 rounds

c. How many rounds of play will it take to determine the champion Ping – Pong player?
Answer:
It will take a total of 16 rounds to eliminate all but one player.