Mathematical Modeling Exercise 1
Callie and Joe are examining the population data in the graphs below for a history report. Their comments are as follows:
Callie: It looks like the U.S. population grew the same amount as the world population, but that can’t be right, can it?
Joe: Well, I don’t think they grew by the same amount, but they sure grew at about the same rate. Look at the slopes.

a. Is Callie’s observation correct? Why or why not?
Answer:
No, the world population grew by a far greater amount as shown by the scale of the vertical axis.

b. Is Joe’s observation correct? Why or why not?
Answer:
No, Joe ignored the scale, just as Callie did. The rate of change (or slope) is much greater for the world population than for the U.S. population. 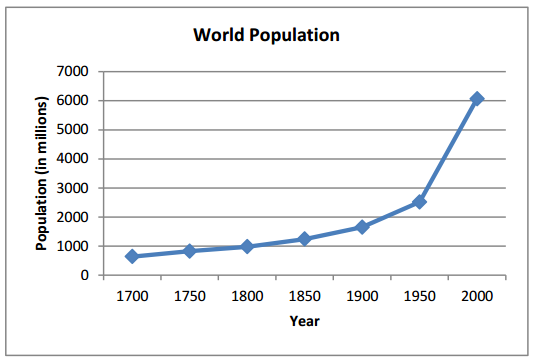 a. How is this graph similar to the World Population graph in Mathematical Modeling Exercise 1? How is it different?
Answer:
This graph uses the same vertical scale as the one for world population in Mathematical Modeling Exercise 1. This graph is different in two ways: (1) It shows years from A.D. 1700 through 2000 instead of from 1950 through 2000, and (2) the graph itself shows that population growth took an exponential turn in approximately 1850.

e. The following is a table showing the world population numbers used to create the graphs above. 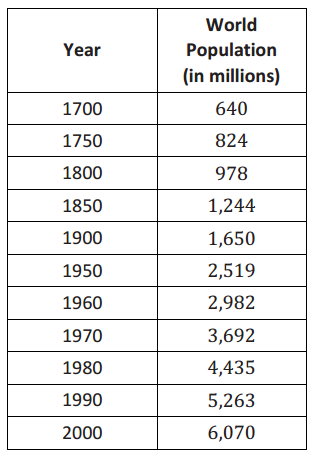 Exercise 1.
The table below represents the population of the United States (in millions) for the specified years.

d. Complete the table below to show projected population figures for the years indicated. Use the formula from part (b) to determine the numbers.

e. Are the population figures you computed reasonable? What other factors need to be considered when projecting population?
Answer:
These numbers do not necessarily take into account changes in technology, efforts to reduce birth rates, food supply, or changes in life expectancy due to disease or scientific advances. Students may come up with a variety of responses.

d. If Oz doubled its current food supply (to 1.4 million), would shortages still take place? Explain.
Answer:
Yes; the food supply would run out during the year 2031. Again, students may justify their responses using a graph or a table.

e. If Oz doubles both its beginning food supply and doubles the rate at which the food supply increases, would food shortages still take place? Explain.
Answer:
Yes; the food supply would run out in the year 2034. Students may justify with either a graph or a table.

Question 1.
Student Friendly Bank pays a simple interest rate of 2.5% per year. Neighborhood Bank pays a compound interest rate of 2.1% per year, compounded monthly.
a. Which bank will provide the largest balance if you plan to invest $10,000 for 10 years? For 20 years?
Answer:
Student Friendly Bank gives a larger balance at the 10-year mark. Neighborhood Bank gives a larger balance by the 20-year mark.

b. Write an explicit formula for the sequence that models the balance in the Student Friendly Bank account t years after a deposit is left in the account.
Answer:
S(t) = 10000 + 0.025(10000)t

d. Create a table of values indicating the balances in the two bank accounts from year 2 to year 20 in 2-year increments. Round each value to the nearest dollar. 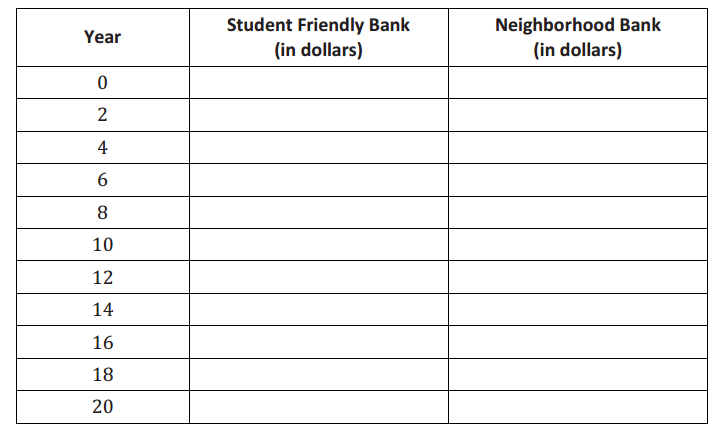 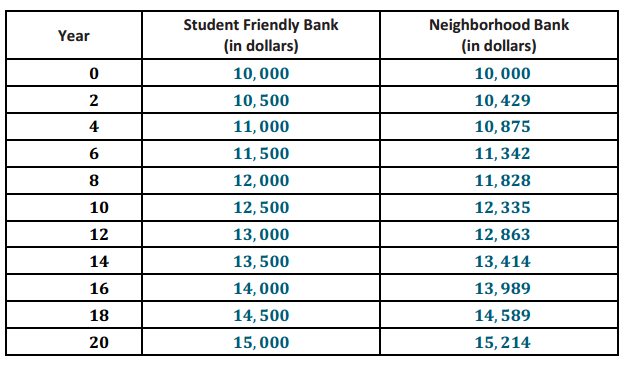 f. What type of model is Student Friendly Bank? What is the rate or ratio of change?
Answer:
Linear; 0.025 per year

Question 2.
The table below represents the population of the state of New York for the years 1800 – 2000. Use this information to answer the questions.

Do the examples below require a linear or exponential growth model? State whether each example is linear or exponential, and write an explicit formula for the sequence that models the growth for each case. Include a description of the variables you use.
Question 1.
A savings account accumulates no interest but receives a deposit of $825 per month.
Answer:
Linear; f(t) = 825t, where f(t) represents the accumulated value in the account after t months