Exploratory Challenge 1: Country Data
A science museum has a Traveling Around the World exhibit. Using 3D technology, participants can make a virtual tour of cities and towns around the world. Students at Waldo High School registered with the museum to participate in a virtual tour of Kenya, visiting the capital city of Nairobi and several small towns. Before they take the tour, however, their mathematics class decided to study Kenya using demographic data from 2010 provided by the United States Census Bureau. They also obtained data for the United States from 2010 to compare to data for Kenya.
The following histograms represent the age distributions of the two countries.

Review with students what each interval of ages represents. For example, the first interval represents people
whose ages are 0≤x<5. Pose the following questions:
→ What percent of people in Kenya are younger than 5?
→ About 17%
→ What ages are represented by the intervals along the horizontal axis?
→ If x represents age, then the first interval would be 0≤x<5, the second interval would be 5≤x<10, etc.
→ What does the first bar (0≤x<5) mean in the U.S. histogram?
→ The percent of people in the U.S. who are younger than 5 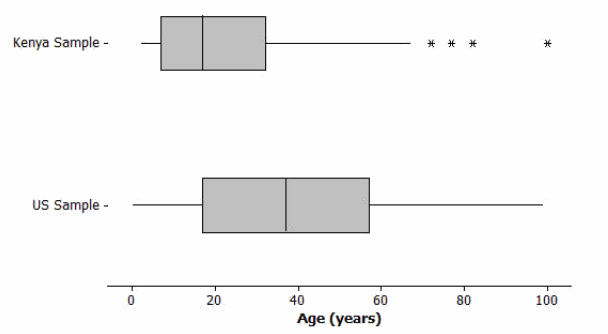 Then, discuss:
→ What information is displayed in a box plot?
→ Median, minimum, and maximum values, quartiles, and IQR are displayed.
→ What does the (*) represent on the box plot for Kenya?
→ It represents extreme values or outliers.
→ Can we find this same information in the histograms from Example 1?
→ No. Median, Q1, Q2, and minimum and maximum are not clear from a histogram. It could only be used to estimate these values.
→ Remind students that the histogram represents the entire population of Kenya, whereas the box plot only represents a sample of 200 people.

Exercise 1.
How do the shapes of the two histograms differ?
Answer:
The bars in the Kenya histogram slowly decline; the distribution is skewed with a tail to the right. The bars in the U.S. histogram are even for a while and then show a more rapid decline.

Exercise 3.
Approximately what percent of people in the United States are between the ages of 0 and 10 years?
Answer:
Approximately 13%

Exercise 8.
The Waldo High School students started planning for their virtual visit of the neighborhoods in Nairobi and several towns in Kenya. Do you think they will see many teenagers? Will they see many senior citizens who are 70 or older? Explain your answer based on the histogram.
Answer:
Adding a portion of the percent of people in the 10 to 14 years old group and the percent of people 15 to 19 years old approximates the estimate of the percent of teenagers. About 15% represents teenagers. Students are likely to see teenagers as this is a relatively large percent of the population. According to the histogram, approximately 3% of the population in Kenya is 70 or older. As a result, students are unlikely to see many senior citizens 70 or older.

Exercise 9.
Adrian, a senior at Waldo High School, stated that the box plots indicate that the United States has a lot of older people compared to Kenya. Would you agree? How would you describe the difference in the ages of people in these two countries based on the above box plots?
Answer:
Yes. The population of the United States has a much greater percent of people in the older age intervals.

Exercise 11.
Using the box plot, 25% of the people in the United States are younger than what age? How did you determine that age?
Answer:
25% are younger than approximately 18 years. I used the value of Q1, or the first quartile.

Exercise 13.
Could you have estimated the mean age of a person from Kenya using the box plot? Explain your answer.
Answer:
No, the box plot does not provide an estimate of the mean age. 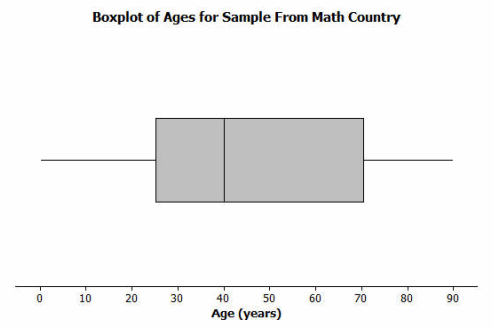 Question 1.
Make up your own sample of forty ages that could be represented by the box plot for Math Country. Use a dot plot to represent the ages of the forty people in Math Country.

Question 2.
Is the sample of forty ages represented in your dot plot of Math Country the only sample that could be represented by the box plot? Explain your answer.
Answer:
There are many possible dot plots that might be represented by this box plot. Any data set with the same 5-number summary would result in this same box plot.

Question 3.
The following is a dot plot of sixty ages from a random sample of people from Japan in 2010.
Draw a box plot over this dot plot.

Answer:
The following is the box plot of the ages of the sample of people from Japan:

Question 5.
What does the box plot of this sample from Japan indicate about the possible differences in the age distributions of people from Japan and Kenya?
Answer:
A much greater percent of the people in Japan are in the older age groups than is the case for Kenya.