Example 1.
Your teacher will show you how to use a calculator to find the mean and standard deviation for the following set of data.
A set of eight men have heights (in inches) as shown below.

Indicate the mean and standard deviation you obtained from your calculator to the nearest hundredth.
Mean: _______
Answer:
68.98 inches

Show students the steps to calculate the mean and the standard deviation of a data set using a calculator or statistical software. The following instructions outline the steps of the statistical features for the TI-83 or TI-84 calculators (one of several calculators used by high school students):
1. From the home screen, press STAT, ENTER to access the stat editor.
2. If there are already numbers in L1, clear the data from L1 by moving the cursor to L1 and pressing CLEAR, ENTER.
3. Move the cursor to the first element of L1, type the first data value, and press ENTER. Continue entering the remaining data values to L1 in the same way.
4. Press 2ND, QUIT to return to the home screen.
5. Press STAT, select CALC, select 1-Var Stats, and press ENTER.
6. The screen should now show summary statistics for your data set. The mean is the \(\bar{x}\)value, and the standard deviation for a sample is the sx value.

Note: Instructions may vary based on the type of calculator or software used. The instructions above are based on using data stored in L1. If data are stored in another list, they need to be referred to after selecting 1-Var Stats in step 5. For example, if data were entered in L2:
5. Press STAT, select CALC, select 1-Var Stats, and then refer to L2. This is done by pressing 2ND, L2 (i.e., 2ND and then the 2 key). The screen will display 1-Var Stats L2. Then, press ENTER.

Exercise 1.
The heights (in inches) of nine women are as shown below.

Use the statistical features of your calculator or computer software to find the mean and the standard deviation of these heights to the nearest hundredth.
Mean: _____
Answer:
68.29 inches

Exercise 2.
A group of people attended a talk at a conference. At the end of the talk, ten of the attendees were given a questionnaire that consisted of four questions. The questions were optional, so it was possible that some attendees might answer none of the questions, while others might answer 1, 2, 3, or all 4 of the questions (so, the possible numbers of questions answered are 0, 1, 2, 3, and 4).
Suppose that the numbers of questions answered by each of the ten people were as shown in the dot plot below.

Use the statistical features of your calculator to find the mean and the standard deviation of the data set.
Mean: ___
Answer:
2 questions
Standard Deviation: ___
Answer:
1.15 questions

a. Use your calculator to find the mean and the standard deviation of this distribution.
Answer:
Mean: 2 questions
Standard Deviation: 1.49 questions

Optionally, draw the following on the board, and compare the diagrams to reinforce the idea.
Mound Shaped:

Exercise 4.
Suppose that all ten people questioned answered all four questions on the questionnaire.
a. What would the dot plot look like?
Answer:

b. What is the mean number of questions answered? (You should be able to answer without doing any calculations!)
Answer:
Mean: 4 questions

Exercise 5.
Continue to think about the situation previously described where the numbers of questions answered by each of ten people was recorded.
a. Draw the dot plot of the distribution of possible data values that has the largest possible standard deviation. (There were ten people at the talk, so there should be ten dots in your dot plot.) Use the scale given below.
Answer:
Place the data points as far from the mean as possible.

Note for Exercise 5(a): The answer to this question is not necessarily obvious, but one way to think of it is that by moving one of the dots from 0 to 4, we are clustering more of the points together; the points at zero are isolated from those at 4, but by moving one dot from 0 to 4, there are now fewer dots suffering this degree of isolation than there were previously.

Students must have access to a graphing calculator to complete the Problem Set.

Question 1.
At a track meet, there are three men’s 100 m races. The times for eight of the sprinters are recorded to the
nearest \(\frac{1}{10}\) of a second. The results of the three races for these eight sprinters are shown in the dot plots below.
Race 1

d. Use your calculator to find the mean and the standard deviation for each of the three races. Write your answers in the table below to the nearest thousandth.

e. How close were your answers for parts (a)–(c) to the actual values?
Answer:
Answers will vary based on students’ responses.

Question 2.
A large city, which we will call City A, holds a marathon. Suppose that the ages of the participants in the marathon that took place in City A were summarized in the histogram below. 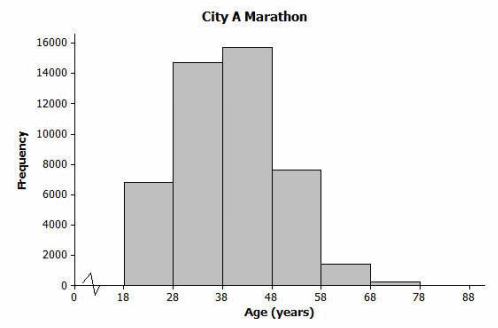 a. Make an estimate of the mean age of the participants in the City A marathon.
Answer:
Around 40 years would be a sensible estimate.

b. Make an estimate of the standard deviation of the ages of the participants in the City A marathon.
Answer:
Between 8 and 15 years would be a sensible estimate.

A smaller city, City B, also held a marathon. However, City B restricts the number of people of each age category who can take part to 100. The ages of the participants are summarized in the histogram below. 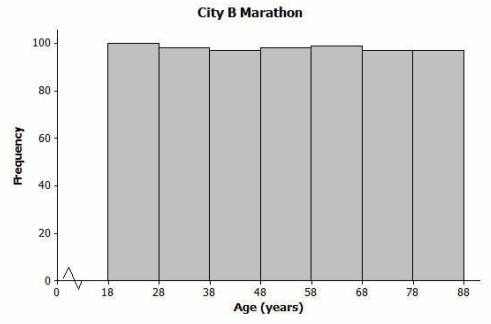 Question 1.
Use the statistical features of your calculator to find the mean and the standard deviation to the nearest tenth of a data set of the miles per gallon from a sample of five cars.

b. What is the set of four student scores that would make the standard deviation as large as it could possibly be? Use your calculator to find this largest possible standard deviation.
Answer:
0, 0, 10, 10
Standard Deviation: 5.77, to the nearest hundredth