Exploratory Challenge/Exercises 1–9
Consider the following three sets of data.
Data Set 1: Pet owners
Students from River City High School were randomly selected and asked, “How many pets do you currently own?” The results are recorded below.

→ Can we assume that all students interpret the question “How many pets do you currently own?” in the same way?

→ Why would the same hallway have different reported measures of length?
→ What measures of the length of the hallway do you think are the most accurate from the data set?

Data Set 3: Age of cars
Twenty-five car owners were asked the age of their cars in years. The results are recorded below.

→ What number would you use to describe the typical age of cars in years by the car owners in this group?

Students now work through Exercises 1–9 of their lesson. Students determine for each distribution if the mean and the median are different or similar and how those characteristics relate to the distribution. Students relate their answers in the context of the data set.
Several of the questions within the exercises can be posed verbally as part of a discussion with students. Other questions may require written responses. Review the questions, and decide what format is best for your students.

Exercise 1.
Make a dot plot of each of the data sets. Use the following scales.
Answer: 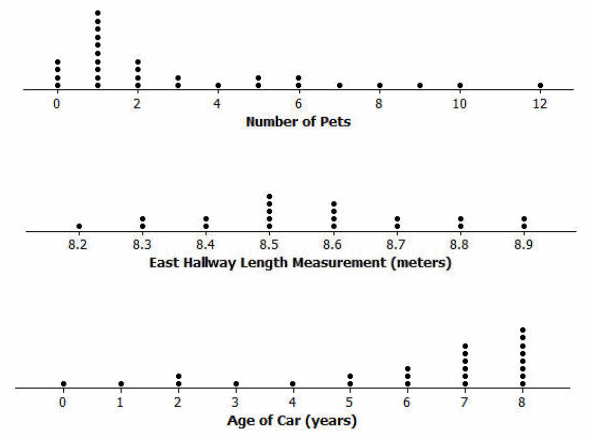 Exercise 3.
What do you think is a typical number of pets for students from River City High School? Explain how you made your estimate.
Answer:
The median is a better description of a typical value. The median is less than the mean because more of the data are located on the left side of the scale. The value of the mean is “pulled up” by the larger values in the data set.

Exercise 6.
A construction company will be installing a handrail along a wall from the beginning point to the ending point of the east hallway. The company asks you how long the handrail should be. What would you tell the company? Explain your answer.
Answer:
It should be approximately 8.6 meters. Since the distribution is nearly symmetric, the mean should be used as a measure of center.

Exercise 9.
What number would you use as an estimate of the typical age of a car for the twenty-five car owners? Explain your answer.
Answer:
The median is a better description of a typical age because the distribution is skewed.

Question 1.
Why might the company be interested in developing different videos based on user score?
Answer:
Answers may vary. 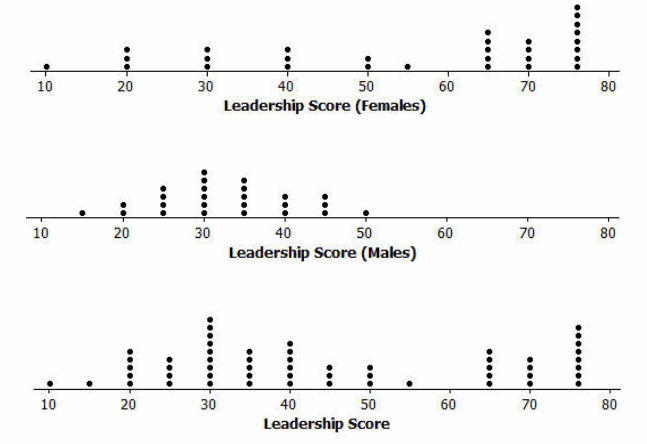 Question 4.
Why is it more difficult to report a typical score for the overall group that includes both the males and females?
Answer:
The overall distribution is difficult to summarize in terms of shape. It obviously combines the symmetrical shape from the male users and the skewed shape from the female users. The mean score of all users is approximately 44.8. The median score is 40. The mean and the median are not the same, but the values are relatively close. The mean is often interpreted as a balance point for this type of distribution. This interpretation of a mean is developed in the next lesson; however, it is also discussed in the Grade 6 standards and could be introduced again with this Problem Set.

Question 5.
Production costs will only allow for two video advertisements to be developed. Which two videos would you recommend for development? Explain your recommendations.
Answer:
In recommending which videos to produce based on the dot plots and measure of center, students will generally select Video 4 (males with beginning level scores) and Video 5 (females with advanced level scores).

Each person in a random sample of ten ninth graders was asked two questions:
→ How many hours did you spend watching TV last night?
→ What is the total value of the coins you have with you today?
Here are the data for these ten students: 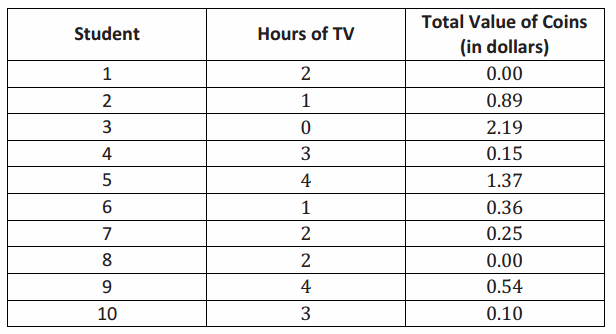 Question 1.
Construct a dot plot of the data on Hours of TV. Would you describe this data distribution as approximately symmetric or as skewed?

Answer:
This distribution is approximately symmetric.

Question 2.
If you wanted to describe a typical number of hours of TV watched for these ten students, would you use the mean or the median? Calculate the value of the measure you selected.
Answer:
Because the distribution is approximately symmetric, I would use the mean. The value of the mean is \(\frac{22}{10}\) or
2.2 hours.

Question 3.
Here is a dot plot of the data on Total Value of Coins.