Question 1.
A recent social survey asked 654 men and 813 women to indicate how many close friends they have to talk about important issues in their lives. Below are frequency tables of the responses.

c. Do you expect the mean number of close friends for the females to be larger or smaller than the median you found in part (b), or do you expect them to be the same? Explain your choice.
Answer:
Mean should be larger than median because of skewedness.

Question 2.
The physician’s health study examined whether physicians who took aspirin were less likely to have heart attacks than those who took a placebo (fake) treatment. The table below shows their findings.

Based on the data in the table, what conclusions can be drawn about the association between taking aspirin and whether or not a heart attack occurred? Justify your conclusion using the given data.
Answer:
\(\frac{189}{11034}\) = 0.017 \(\frac{104}{11037}\) = 0.0094
The placebo group had higher proportion of heart attacks, although both numbers are pretty small.

Question 3.
Suppose 500 high school students are asked the following two questions:
→ What is the highest degree you plan to obtain? (check one)
→ High school degree
→ College (Bachelor’s degree)
→ Graduate school (e.g., Master’s degree or higher)
→ How many credit cards do you currently own? (check one)
→ None
→ One
→ More than one
Consider the data shown in the following frequency table.

Question 4.
Weather data were recorded for a sample of 25 American cities in one year. Variables measured included January high temperature (in degrees Fahrenheit), January low temperature (in degrees Fahrenheit), annual precipitation (in inches), and annual snow accumulation. The relationships for
three pairs of variables are shown in the graphs below (January Low Temperature—Graph A; Precipitation—Graph B; Annual Snow Accumulation—Graph C).

a. Which pair of variables will have a correlation coefficient closest to 0?

(3) lower, higher, the same, equally likely to be higher or lower
Answer:

Question 5.
Suppose times (in minutes) to run one mile were recorded for a sample of 100 runners ages 16–66, and the following least squares regression line was found.
Predicted time in minutes to run one mile =5.35+0.25×(age)
a. Provide an interpretation in context for this slope coefficient.
Answer:
For every year older that a runner is, we predict the time to run one mile to increase by 0.25 seconds.

b. Explain what it would mean in the context of this study for a runner to have a negative residual.
Answer:

The runner was even faster (lower time) than we could have predicted for that age.

c. Suppose, instead, that someone suggests using the following curve to predict time to run one mile. Explain what this model implies about the relationship between running time and age and why that relationship might make sense in this context. 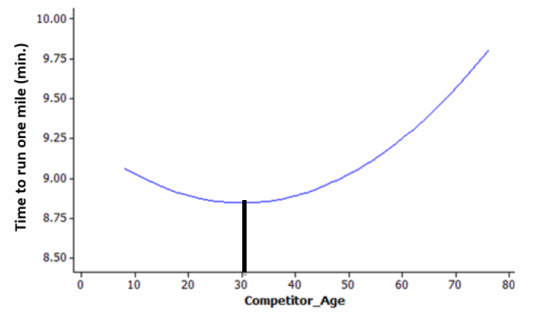 Answer:
This model implies that runners get faster (lower mile times) until around age 30 , when they start to slow down. In this context, the relationship might indicate that the younger runners had not trained as long as runners in their thirties, which would explain the decrease in times from age 10 to age 30 . Then, as runners’ ages continue to increase, their mile times also increase due to the decrease in muscle strength that comes with age.