Example:
Why Does the Elimination Method Work?
Solve this system of linear equations algebraically.

Multiply the first equation by 3, and add it to the second. Solve the new system. (1,4)

→ Why did I multiply by the number 3?
→ Multiplying by 3 allows one to generate 3y to eliminate the -3y in the other equation when both equations are added together; it leads to an equation in x only. Selecting this number strategically created a new system where one equation had only a single variable.
→ Could I have selected a different number and created a system that was easy to solve?
→ Yes, you could have multiplied the second equation by -2 to create a system that eliminated x.

Exploratory Challenge
a. Write down another system of two linear equations, B1 and B2, whose solution is (3,4). This time make sure both linear equations have a positive slope.
Answer:
Equation B1: y=x+1
Equation B2: y=2(x-3)+4 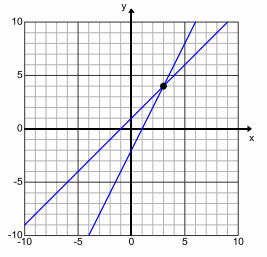 d. Are either B1 or B2 equivalent to the original A1 or A2? Explain your reasoning.
Answer;
Yes, I used the same B1. B2 is a different equation because it has a different slope. The only thing all the equations have in common is the point (3,4).

Hold a class discussion before moving on to parts (f)–(i). When you debrief and discuss, be sure to highlight the different approaches. Begin to distinguish between solutions where students created a new system by simply multiplying one equation or both by a constant factor and those who create two new equations that both contain the point (3,4).
→ What different approaches did groups use to solve this problem?
→ I used guess and check.
→ I started with the point (3,4) and realized I could pick any slope I wanted. I moved left 3 and down 4 until I got to the (0,0); therefore, my equation would be y=\(\frac{4}{3}\) x.
→ When you multiplied one equation by a constant, did it actually create a different linear equation? When you added two equations together, did it actually create a different equation?
→ Multiplying by a constant doesn’t create a different equation because the slope and y-intercept are the same. Adding two equations together does create a new equation because the slope is different.
Move on to parts (f)–(i). These questions specifically direct students to consider creating a new system by multiplying one equation by a constant and adding it to another. Students are considering whether or not this is a valid way to generate a system with the same solution. Have each group record their answer to part (i) on the board to show that this method works regardless of the number by which you multiply.

The following system of equations was obtained from the original system by adding a multiple of equation A2 to equation A1.
Equation D1: y=x+1
Equation D2: 3y=-3x+21

g. What is the solution to the system of two linear equations formed by D1 and D2?
Answer:
The solution is still (3,4). I checked by substituting (3,4) into both equations.

h. Is D2 equivalent to the original A1 or A2? Explain your reasoning.
Answer:
No, the slope of D2 is -1. Neither of the original equations had that slope.

Wrap up the discussion by emphasizing the following:
→ Will this method of creating a new system work every time? Why does it work?
→ This method will always work because multiplying by a constant is a property of equality that keeps the point of intersection (i.e., the solution set) the same.
→ Who said you can add two equations like that? Left-hand side to left-hand side; right-hand side to right-hand side? How do you know that the solutions are not changed by that move?

Exercises
Both of these exercises mimic the example. Students should be able to work quickly through them since they learned to solve systems by elimination in Grade 8.

Exercise 1.
Explain a way to create a new system of equations with the same solution as the original that eliminates variable y from one equation. Then determine the solution.

Answer:
Multiply the second equation by 3, and add it to the first one.

Exercise 2.
Explain a way to create a new system of equations with the same solution as the original that eliminates variable x from one equation. Then determine the solution.

Answer:
Multiply the second equation by -2, and add it to the first one.

Try to answer the following without solving for x and y first:

Answers in parts (a) and (b) are obtained by adding and subtracting the two original equations WITHOUT actually solving for x and y first.

Question 3.
Solve the system of equations

by graphing. Then, create a new system of equations that has the same solution. Show either algebraically or graphically that the systems have the same solution.
Solution is (4,1).
Answer:
One example of a second system:

Solve each system of equations by writing a new system that eliminates one of the variables.

The sum of two numbers is 10 and the difference is 6. What are the numbers?

Question 1.
Create a system of two linear equations to represent this problem.
Answer:
x+y=10 and x-y=6

Question 2.
What is the solution to the system?
Answer:
x=8 and y=2

Question 3.
Create a new system of two linear equations using the methods described in part (i) of the Exploratory Challenge. Verify that the new system has the same solution.
Answer: