Today we are here with an article that helps you to know about the concept of Equal Intercepts Theorem. In geometry, intercepts are the lines that cross or make a transversal in two or more parallel lines. Here, 9th Grade Math students can learn and grasp the equal intercepts theorem statement and the proof in detail which gives a grip to solve the problems on equal intercepts.

What is Equal Intercept Theorem?

Consequently, the given three parallel lines, a line passing through them form intercepts in an equal ratio of the distance between the lines given. We can prove this theorem by any geometrical proof, let us study, how the theorem is proved? 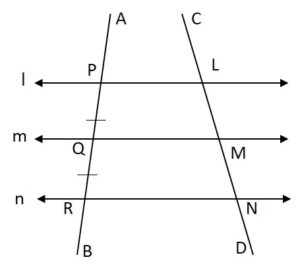 We have to prove that the lines LM = MN.
For that, we will construct the given above diagram.

To prove the given statement, we draw a line from the point P to N and name the midpoint as ‘O’. 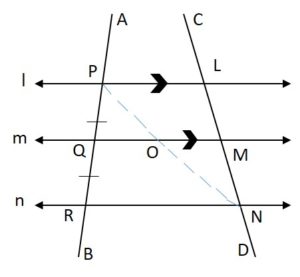 Proof of the Theorem:

In the given triangle ABC, DE ∥ BC, then find the value of EC? 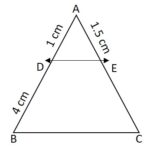 4. How do you prove the equal intercept theorem?
If we have three or more parallel lines and the intercepts made by them on the transversal are equal and the corresponding intercepts on other transversals also make equal.