To draw an angle all you need are some basic tools like a protractor, ruler, compass, and a pencil. This article provides types of angles, how to draw an angle in different methods, and more examples to construct an angle. At the end of this page, you will be completely aware of constructing an angle using a compass & protractor.

An Angle is nothing but when two lines intersect each other at a common vertex point. While drawing an angle, 4th Grade Math students & other higher grades kids should have a quick review of different angles that made them easy to grasp. The following are the five types of angles we have:

Do Refer the articles:

Methods on How to Draw Angles Step-by-Step

In geometry, drawing an angle can be possible with unknown and known measures by using some geometrical tools. Here, we have two methods to follow while constructing an angle.

How to Use a Protractor to Draw Angles?

A protractor is a semi-circular tool used to draw and measure angles, from 0° to 180° in clockwise and anti-clockwise. If kids are familiar with drawing an angle with a protractor then they can easily draw an angle between 0° to 180°. Drawing Angles using a Protractor can be easy if you follow the below steps.

To construct an angle of any given measure, children can follow these simple steps.

Step 1: Draw a line segment of any length, and name both ends.

Step 2: Place the protractor at the start point of a line segment drawn.

Step 3: The protractor has two sets of markings. We examine the scale which has 0° near the endpoint of a line segment. Mark, another point next to the degrees given to measure or draw an angle and label the point. 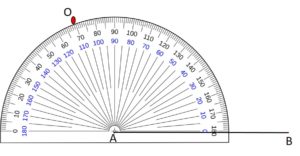 Step 4: Finally, join both the points, i.e., the starting point of the line segment and the point marked using a protractor by a line. By joining three points we get a required angle. 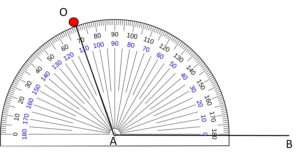 How to Draw Angle with Compass?

To draw an angle of any measure one more useful tool you need is a compass. Using compass children may feel difficult but by following these simple steps they can make an angle with a compass easily & effortlessly.

Step 1: Draw a line segment of any line and mark both the points as AB.

Step 2: Take the compass and place the pointer at point A, move the arm of the compass of some length. Draw an arc by the pencil which meets the line AB and point as P. 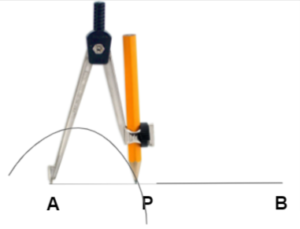 Step 3: Move the compass without disturbing the length and place the pointer at point P and mark an arc that passes through point A and should intersect the previous arc at a point, name point as Q. 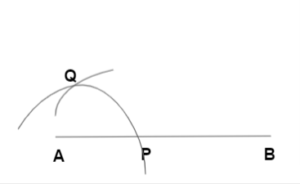 Step 4: Draw a line from point A through point Q and name the line as point C. We get the required angle i.e., ∠CAB of degrees measured. 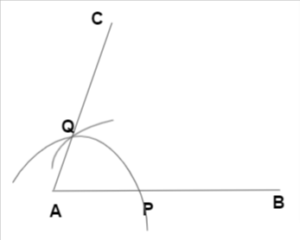 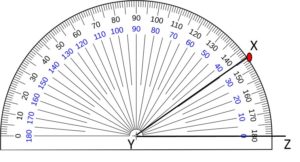 Example 2:
Draw an angle of 140° using a protractor.
Solution:
Draw a line segment QP.
Place the protractor at straight line PQ and the midpoint of the protractor be at point P.
Mark the 140° where the line coincides with the 0° and name the marked point as O.
Join the points P and O by a line with the help of a pencil. We get a required angle ∠OPQ = 140°. 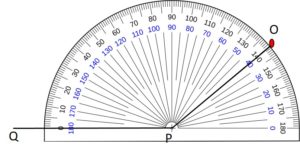 Example 3:
Draw an angle of 60° with a compass.
Solution:
Draw a line segment AB.
Take a compass with A as a center of any width draw an arc that meets the line AB and label the point as O.
Without changing the length of the compass, draw an arc from the point O as a center and name the point as Q that passes through A and intersects the previous arc.
Now, draw a line from point A through Q and label the line endpoint as X.
The required angle is ∠XAB = 60°. 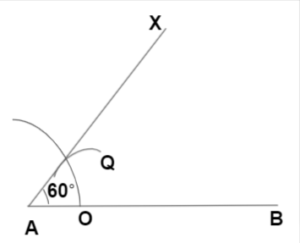 Example 4:
Construct an obtuse angle of 120° by compass.
Solution:
Draw a line segment ST.
Take a compass of any width. Place at point S as a center and draw an arc on line ST and name the arc as point A.
Mark another arc of the same length of a compass and make a center as A. Label the arc as point B.
Now, without disturbing the compass length, mark another arc taking point B as a center that intersects the previous arc A. Label the arc as point C.
Draw a line from point S through C and extend the line and label it as R.
We get a required obtuse angle ∠RST= 120°. 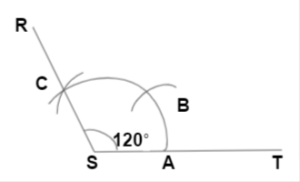