In Maths Numbers are Classified into Various Types like Real Numbers, Whole Numbers, Natural Numbers, Rational Numbers, etc. Decimal Numbers is a Standard form among them used to represent integers and non-integer numbers. By going through this article, you will learn all about the Definition of Decimals, Types, Properties, Conversions, Examples, etc. in the later modules.

For instance, 23.4 is a decimal number in which 23 is a whole number and 4 is called the fractional part.

“.” is called the decimal point.

Below is the list of Decimal Topics for your reference. You can access them by simply clicking on the quick links available. Once you click on them you will be redirected to a new page having the entire concept explained with examples. Try solving as much as possible to get a good grip on the concept.

Non-Recurring Decimal Numbers: These are also called Non-Repeating or Terminating Decimals. They are further classified into finite and infinite non-recurring decimal numbers.

Decimal Fraction: It Represents the fraction whose denominator is in powers of ten.

In Order to Change the Decimal Number to Decimal Fraction firstly place 1 in the denominator and remove the decimal point. “1” is followed by zeros that are equal to the number of digits following the decimal point.

For Example to convert 2.345 to decimal fraction we get

2 represents the power of 101 that is the tenths position.

2 represents the power of 100 that is the unit’s position.

3 represents the power of 10-1 that is the one-tenth position.

4 represents the power of 10-2 that is the one-hundredths position.

This is how each digit is represented to the power of a decimal number.

Place Value System defines the position of a digit in a number that helps to determine its value. When we write Numbers Position of each digit is important. 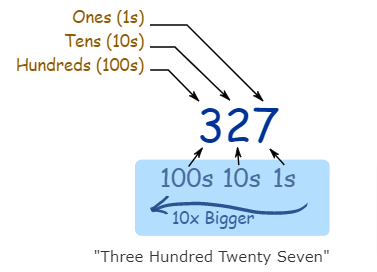 Therefore, we read it as Three Hundred Twenty-Seven 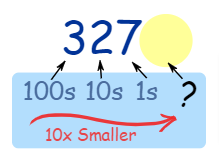 Moving towards the right each position becomes 10 times smaller from Hundreds to Tens to Ones. If we continue further the process after ones \(\frac { 1 }{ 10 } \)ths are smaller. Before doing so, you need to place a decimal point. 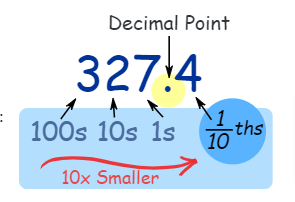 For a better understanding of the concept of place value check out the Place Value Chart below.

Decimal Expansion of the number is expressed as follows

Here, each number is multiplied with associated power of 10.

Below is the list of important properties of decimal numbers under both multiplication and division operations. They are as follows

Similar to performing Arithmetic Operations on Integers you can do the same with Decimals. Let us discuss important tips while performing arithmetic operations.

Subtraction: Decimal Subtraction is also similar to Decimal Addition. Just like Decimal Addition line up the decimal point of given numbers and subtract the values. To do the arithmetic operation use place holding zeros for your reference.

Conversion of Fraction to Decimal or Decimal to Fraction is quite simple. We have explained both the methods by even taking few examples. They are as follows

Numbers after the decimal points denotes tenths, hundredths, thousandths, and so on. While converting from decimal to fraction note down the decimal numbers in expanded form and then simplify the values.

On dividing, we get the decimal value as 1.5

The given decimal number is 3.35