Statistics deals with the study of collecting data, analyzing the data, interpreting, organizing, and presenting the data. In statistics to represent the information or data, we use bar graphs, piecharts, tables, graphs, picturing, and so on. The frequency in statistics tends to represent a set of data by a representative value which would define the entire collection of data.

In this article, we learn one of the data representations used in statistics that is the pie chart. Here we are learning how to construct a pie chart, pie chart definition, formula, Examples on Pie charts, advantages and disadvantages of the pie chart.

Do Read: Construction of Bar Graphs

A pie chart is also called a pie diagram. A pie diagram is additionally referred to as a circle chart. Pie diagrams are also replaced by some other graphs such as graphs, line graphs, histograms, line plots, and etc. The statistical data is divided into sectors or slices. Each sector represents a proportionate part of the total. In order to find the composition of something pie charts are used.

The following are the steps given below, we consider these steps for the pie chart formula:

How to Construct a Pie Chart?

The pie chart is extensively used because it is easy to read the data and access the data. The pie chart makes the size of the portion easy to understand. Below are the steps the data can be represented by a pie chart by using the circle graph formula.

Step 1: Initially, the data will be entered into the table.

Step 2: Next, we add the values in the table to get the total.

Step 3: We get the total, that total divides each value by the total and multiply by 100 to get a percent.

Step 4: To know how many degrees needed for each pie sector, take a full circle of 360 degrees then we follow the calculations below,

The central angle of each component = (Value of every component/ sum of values all the components) x 360°.

Step 5: By using the protractor draw the circle and measure the degree of each sector.

The pie chart will be used to represent the data and comparing the data with others is easy. The advantages of the pie chart are listed below:

The following pie charts the data shows the percentage of types of transport, suppose of 100 people use most often 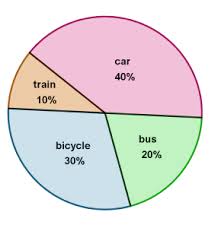 i) How many people use the car most often?

b) How many people don’t use trains most often?

c) How many people use bicycles or buses most often?

Given the 100 people most often used transport vehicle data.

(i) Given the data of 100 people’s vehicle usage

now we can find the number of people’s often car

(ii) Given the data of 100 people’s vehicle usage

So, based on the result 90 people don’t use the train most often.

Therefore, 50 people use bicycles or buses most often.

‘A ‘ lists down her monthly expenditure as follows. Based on the given data draw the Pie Chart?

Given the ‘A’ monthly expenditure in the table follow.

Now, Construct a pie chart of the given data.

Steps of construction of chart for a given data 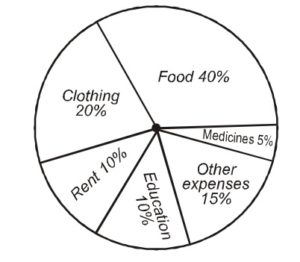 Many real-time examples of a pie chart are there. Some of them are listed,

2. How do you explain Pie Chart?

A Pie Chart is a type of graph that displays data in a circular graph. The pieces of the graph are proportional to the fraction of the entire in each category. In other words, each slice of the pie is relative to the dimensions of that category within the group as an entire.

3. How to calculate the percentage of data in the pie chart?

Measure the angle of each slice of the pie chart and divide by 360 degrees. Now multiply the value by 100. The percentage of particular data will be calculated.

4. How do you find the angle for a pie chart?