Money is the medium of exchange for people to facilitate trade for goods and services. Money is in two forms. They are coins and currency. We can write the amount of money in two forms. i.e. Word form and figures. It also includes the Denomination of coins, Denomination of Currency, examples of how to write the amount of money in word form, and figures.

The rupee is a larger unit of money than paise. For writing paise, we use ‘p’. The abbreviation of rupees is Rs.

We use dot (.) to separate rupees and paise. The figure on the left of the dot represents rupees. The figure on the right of the dot represents paise. The number of paise is written as a 2-digit number.
(i) If we have to represent the amount of money consists of the only paise place zero before the dot (.) to indicate that there are no rupees. For example, 35 paise is written in figures as Re 0.35 or 35 p.
(ii) If the paise has one digit, we put zero before it to make a two-digit number. For example, 5 paise in the figure is written as Re 0.05 or 5 p.
We know that: 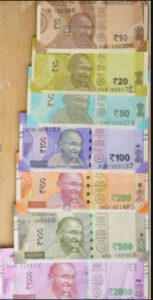