Dividing the angle is known as the bisecting angle. Let us see some examples of bisecting an angle to know deeply about the concept. The students of 5th grade can make our page as a reference to secure maximum marks in the exams.

What does Bisecting an Angle Mean?

Bisecting an angle is nothing but dividing the angle into equal parts or groups. The bisection of angle is done with a ray which is known as bisector. Let us see the figure to know what is angle bisector.

∠XOY is the angle and OZ is bisecting the given angle into two parts.

Types of Bisecting an Angle | How to Draw Angle Bisector?

∠ABC is the given angles. Now fold the paper where AB falls along with BC and press the paper. And then unfold the paper you will find the angle bisector of ∠ABC.

ii. Bisecting an Angle with a Compass 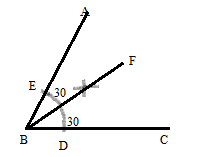 ∠ABC is the angle to be bisected.
Place one end of the compass at point B and draw an arc to BC and label it as D and AB at E.
And with less than half as the radius draw an arc from E and D. and draw the line at the intersection point from B to F.
Thus BF is the bisection of an angle.

iii. How to Bisect Angles using a Protractor?

∠XOY is to be bisected. First, we have to measure the angle of ∠XOY by using a protractor. The angle of measure is 60 degrees.
Now we have to bisect the angle ∠XOY.
Half of 60° is 30°.
Thus the angle of bisection for ∠XOY is 30°.
Therefore, ∠XOY is divided into two equal angles by the line OZ.

FAQs on Bisecting an angle

1. What is bisecting an angle?

Dividing the given angle into equal parts is called bisecting an angle or angle of bisection.

2. What is bisecting a line?

Dividing the line segment into two equal parts is called bisecting a line. It is also known as a perpendicular bisector.

3. What are the methods to bisect an angle?

There are three methods to bisect an angle.
1. Folding paper
2. Using a protractor
3. Using the compass