The measurement between the two lines is called an “Angle”. It is formed in between the common point of two rays. Also, the rays are known as the arms of the angle. The symbol used to represent an angle is ‘∠’. The angle is measured in degrees such as 30°, 45°, 60°, 90°, 180°. Also, another way to represent an angle in radians. It is called pi (π). Read on the article to know the definition of angle, types of angles, properties, parts of an angle, how to measure angle along with few examples.

What is Angle in Maths?

A Figure formed by two rays or lines sharing a common endpoint is known as Angle. The common end where two rays meet is called a node or vertex. It is denoted using the symbol ∠. Some greek letters like θ, α, β, etc are also used to represent an angle.

Check out the important properties of angles given below. Make a note of these angles for further preferences.

An angle consists of different parts such as vertex, arms, Initial Side, and Terminal Side. They are given below 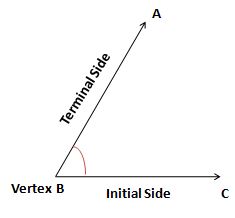 Vertex: The endpoints of an angle are called vertex. It is the endpoint where two rays meet.
Arms: The sides of an angle are known as arms of the angles. An angle has two sides.
Initial Side: The Initial Side is also called a Reference line. While taking measurements, all the measurements are taken using this reference line.
Terminal Side: Terminal Side is the side where the angle measurement is done.

Degree of an Angle

The degree of an Angle is represented as ‘°’. The angle is considered as 1° if the rotation is from the initial point to the terminal side is equal to 1/360 of the full rotation. Also, the degree is divided into minutes and seconds.
1°= 60′ = 3600”

Radian of an Angle

Radian of an Angle is nothing but the SI unit of angle. All the derivatives and integrals can be calculated in radians and denoted by ‘rad’. When you consider a full complete circle, then there will be 2π radians available.
360 = 2π
1 radian = 180°/π

Gradian of an Angle

Gradian of an Angle is known as gon or a grade. The angle is equal to 1 gradian when the rotation starts from the initial point to the terminal side is 1/400 of the full rotation.

How to Label the Angles?

Two different ways are available to label the angles. They are

1. By giving a name to the angle using small letters.
2. Also, by using the three letters on the shapes. The middle letter represents the vertex of an angle. Example ∠ABC = 60°.

How to Measure an Angle?

The Angle Measurement is calculated using a tool called protractor. It consists of two sets of numbers that appear in two opposite directions. One set goes from 0 to 180 degrees and the other set is from 180 to 0 degrees.

There are different types of angles available depends on based on their measure of the angle. They are

An angle that measures between 0° to 90° is called an Acute angle. From the picture below, the angle formed by the intersection of AB and BR at B forms an angle ABC which measures 35°. Thus, ABC is called an acute angle.

The Right Angle is an angle that measures exactly 90°. At a right angle, the two lines are perpendicular to each other. In the figure below, line AB intersects line BC at B and forms an angle ABC which measures 90°. 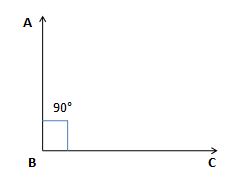 The Obtuse Angle is an angle that measures greater than 90°. An Obtuse Angle lies between 90° and 180°.
Obtuse Angle Measure = (180 – acute angle measure)
In the figure below, line AB intersects line BC at B and forms an angle ABC which measures 140°. Thus, ABC is called an obtuse angle. 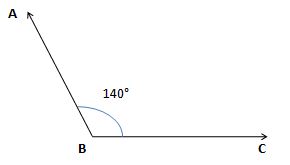 The Reflex Angle lies between greater than 180° and less than 360°. Also, the reflex angle is completely complementary to the acute angle on the other side of the line.
A Measure of Acute Angle = 360° – a Measure of Reflex Angle 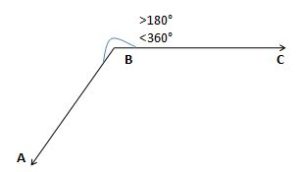 The Full rotation of angle that is equal to 360 degrees is called Full Rotation.

Different Types of an Angles

Check out the below table to know all the angles and their description in a single place. 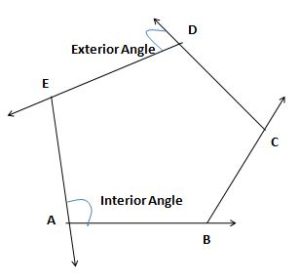 When two angles add up to form a 180° then they are known as supplementary angles. 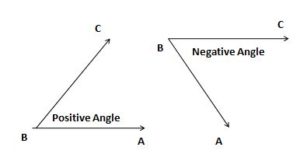 An angle is formed by joining two rays at the joint at a single point. The two rays to form an angle are known as arms or sides of the angle and the common point is the vertex of an angle.

2. What are the main six types of angles?

The Zero angle is an angle that measures zero degrees.

4. How angles are measured?

The angles are measured using a tool named a protractor.

5. What are the properties of angles?