By accessing our 180 Days of Math for First Grade Answers Key Day 59 regularly, students can get better problem-solving skills.

Question 1.
Write the number before and after 79.

Explanation:
Perform addition operation on above two given numbers. Add 7 with 2 the sum is equal to 9

Explanation:
Perform subtraction operation on above two given numbers. Subtract 4 from 8 the difference is equal to 4.

Explanation:
A hexagon is a two-dimensional shape having 6 sides, 6 vertices and 6 angles. A hexagon is drawn as we can observe in the above image.

Explanation:
In the above image we can observe two objects dinosaur and bird. The right object bird is smaller than the left side object dinosaur. So, draw a circle for bird.

Question 7.
Record the data in the chart. Use numbers. 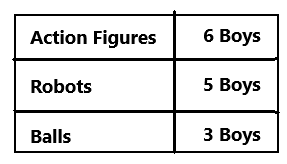 Explanation:
Given data is Six boys like action figures, Five boys like robots and Three boys like balls. The given data is recorded in the above chart by using numbers.